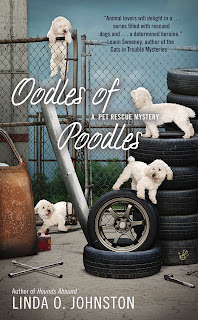 Hey. I’m Zoey, and I’m glad to get the opportunity to speak here. I’ve been told that I’m a dog, and that I’m part Border collie and part Australian shepherd, but I’m really just me.

People may think that I’m owned by Lauren Vancouver, the person starring in the Pet Rescue Mysteries, but I’d say we belong to each other. I consider myself a stabilizing influence for Lauren, and she needs one. She’s the chief administrator of HotRescues, a shelter for animals in ’s . Her main purpose there is to save dogs and cats that need new homes, bring them to HotRescues, then find them those homes as fast as possible. That means she’s happiest when she brings in an animal and then says goodbye to him again right away, when he’s adopted. She does a good job with that, so she seldom gets to know another dog or cat very well.

I, on the other hand, am always there for her--which is a good thing since her two human kids are off at what they call college. I’m not sure what that is, and it doesn’t matter, but I like the attention they give me when they come home.

There are a couple of human stabilizing influences in Lauren’s life, too. One is her good friend Carlie, a veterinarian and TV star. I don’t know much about the TV stuff, although I do watch a bit when Lauren has Carlie on that strange gadget at our house where Carlie’s there talking but has no scent. Mostly, I like how Carlie takes care of me when I’m not feeling well, which fortunately isn’t often.

The other stabilizing influence is Lauren’s friend Matt Kingston. Now, I really like Matt. I owe him. He works for Los Angeles Animal Services, which means he gets to meet a lot of animals in need of new homes right away. In fact, he picked me out of one pack of dogs who’d been saved and brought me to meet Lauren, who fell for me as much as I fell for her. Now, we see a lot of Matt and his dog Rex, who they say is a black Lab mix. To me, Rex is just another pack mate.

I have to say that the more stabilizing influences in Lauren’s life, the better, since she has taken on some missions that put her in danger. I help when I can, but the woman keeps trying to help herself and friends by solving murders of other humans. I’d rather she just stay home and give me treats and stay out of trouble, but she’s my human and I’ll always be there for her.