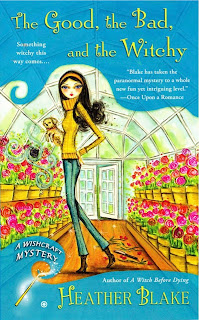 During my brief time in the , I’ve realized a few things about myself. The fact that I’m a Wishcrafter, a witch who grant wishes, never ceases to amaze me—and I love this newfound ability.

Then there’s been the discovery that I’m pretty good at solving crimes. Truthfully, that’s a talent I could do without. If I never come across another dead body, I’d die a happy witch.

But it was the last dead body I’d found—that of local young man—that revealed that I’m not easily spooked. You see, his ghost imprinted on me, which meant that his ghostly form was stuck in some sort of witchy limbo until I figured out who killed him.

All right, okay. In all honesty, I was a bit freaked out when I first realized that I was being haunted. But after a while...I didn’t mind the company so much. But the most surprising aspect of being imprinted upon came when I realized that my ghostly friend wouldn’t be sticking around forever. And then when he—

Well, I won’t ruin it for you—it’s all there in the new book. I will say being haunted isn’t so bad, but I’m not eager for it to happen again any time soon.
--The Good, the Bad, and the Witchy debuted April 2 and is available at independendant bookstores everyewhere, as well as at amazon.com and bn.com. Heather Blake also writes the Nina Quin and Lucy Valentine mysteries as Heather Webber.