I've lived in Ohio in Ohio my entire life, so I've always known about the Amish. In Cleveland where I grew up, it's not that uncommon to see an Amish man on a construction job site or an Amish family visiting the Cleveland Zoo.

One of the most indicative pieces of Amish clothing is the head coverings that the women wear. Amish women wear two important head coverings: the prayer cap and the bonnet.

The head coverings are a sign of humility, modesty, and readiness for prayer. The Amish believe that one should be ready for prayer at all times; therefore a woman’s head should always be covered.

The Amish leaders, such as the bishop and preachers, give the Bible as their basis for this rule. They refer to 1Corinthians 11:5-6, “But every woman who prays or prophesies with her head uncovered dishonors her head, since that is one and same as having her head shaved. So if a woman’s head is not covered, her hair should be cut off. But it is disgraceful for a woman to have her hair cut off or her head shaved, she should be covered.” (HSCB) 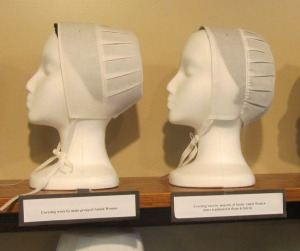 Just like everything in the Amish world the style of the bonnet and prayer cap differ between orders and districts. An Amish woman can look at another Amish woman wearing a slightly different bonnet than hers—maybe it has additional pleat or a longer brim—and know the type of Amish the other woman is. For us Englischers the differences are so minor, it’s hard for us to recognize them.

Typically, an Amish woman will wear a black bonnet when in public, while traveling, or while outside in bad weather. The bonnet is a larger hair covering worn over the prayer cap. The women wear white prayer caps when at home, at church, or indoors. In some districts, unmarried women wear black prayer caps on Sundays.

The Old Order Amish women living in Appleseed Creek wear Midwest Style bonnets similar to the one in the first picture above. The second picture are examples of prayer caps from Appleseed Creek.

Every time I learn something new about the Amish it helps me understand the Troyer family and what they believe a little bit better. I hope my willingness to learn will show them how much I care about them, especially Becky, and of course, Timothy.