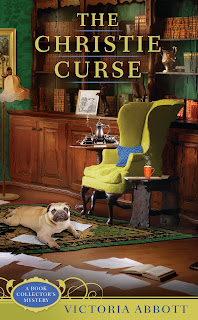 Submitted by Walter the Pug, currently being spoiled in The Christie Curse: a book collector mystery by Victoria Abbott

I’m not really sure how it all happened, but I do know, nobody consulted me.  My name is Walter Pug and my person’s name is Karen.  A few weeks ago she went out and left me at home alone, although, she did scatter some treats around the kitchen like a good person.  From the couch, I watched her red curly fur bounce down the driveway and get in the van.  Now, usually, I might howl, because I really like to go for rides in the van but this weekend, I needed to get some things done around the house.  For example, there were two cheerios wedged under the stove, and Karen’s bed had just been freshly made so I had hours of rolling and shedding to do in order to get it all up to snuff for snuggles tonight.


Now, I can’t say that I am really great at keeping track of time, but by my best estimate Karen was gone for over three months by the time I woke up from my nap.  Don’t get me wrong, I like my “me” time but this was a little ridiculous.  In order to alert the proper authorities, I began a campaign of barking and baying.  After a while, with no success, and me with my legs crossed, I felt that Karen needed to be disciplined.  So that she would know I was displeased, I chewed up a couple of those book things she leaves lying around. Sometimes I’m a bit jealous of all the attention she pays to them.   But all those books did was work up my thirst.  And my water bowl was nearly empty.  I was getting parched from my howling. 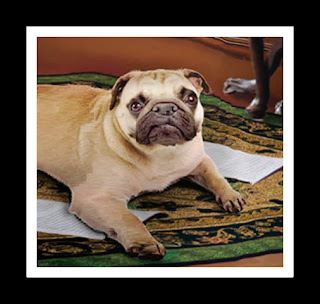 The dark time had become the light time and now was turning back into the dark time again.  I was going to sit that Karen down and bulge my eyes at her so hard when she returned!

That’s when someone came.  I heard her at the door first, then on the stairs.  My tail got all excited but didn’t tell my face, so I was all snarls and raspy barks when she came through the door.  She was pretty with long dark fur and a singsong way of talking to me, which I enjoyed very much but she smelled like cats, no accounting for taste.  Her name was Jordan; at least that’s what she told me.

Long story short, I was whisked away to a very interesting place.  Michael J.  Kelly’s  Fine Antiques had millions of smells, all new and interesting and the people there introduced me to something called Kraft Dinner and Pop Tarts.  Everyday, I miss Karen, but if I look even a little bit sad, they feed me.  Every now and then the one named Jordan comes by to talk with my new friends, Mick and Lucky.  I think they feel sorry for her, living under feline oppression and all.

On her last visit, she gave me some liver and whispered in my ear that I’d see Karen again soon.  I hope so, but you can’t really count on a girl who has cat stink all over her, so we’ll see what the future holds for me.

Tonight they cooked someone named Frank, with beans and Jello pudding for dessert.  Even Jordan was here, she said it was a guilty pleasure.  My guilty pleasure is running through the leaves in Yelling Man’s yard, next door.  What’s your guilty pleasure?

Looking forward to hearing about it. I can keep a secret.

Victoria Abbott is the mother/daughter team of Victoria and Mary Jane Maffini. Together (with no help from their dogs) they write the book collector mysteries. They're really excited about The Christie Curse (released in March) and want you to know that The Sayers Swindle comes out in December.

They'd love it if you'd stay in touch with them! For more info and to sign up for the newsletter, visit
www.victoria-abbott.com

Come and have fun on Pinterest (it's very puggy)
www.pinterest.com/jbinghamkelly