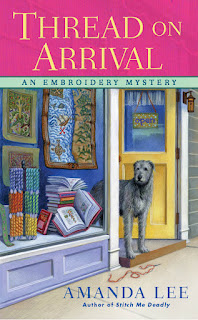 by Christine Willoughby from THREAD ON ARRIVAL by Amanda Lee

Today I met my perfect daughter-in-law. Her name is Marcy Singer, and she owns the embroidery specialty shop, The Seven-Year Stitch. Too bad for me--and Jared, my son--Marcy is already in a relationship.

Let me back up a bit. Jared is as sweet as the day is long, charming, and good looking. He gets his height and broad shoulders from his dad and his dark hair and eyes from me. Anyway, Jared was married to Susan, a mean-spirited, manipulative shrew. She left Jared to pursue greener pastures, but I believe she's finding out that all pastures have the same amount of cow manure.

Jared and Susan are divorced now. But I'm scared to death that when the man Susan is after throws her over, she'll come running back to Jared and break his heart all over again. The man she wants is none other than Adam Cantor. You might've heard that Adam has something of a temper. He's been court ordered to anger management classes more than once. People around Tallulah Falls say he's abusive to his wife, Mary, and to his dad. Why Susan would want an abusive married man over my precious Jared is beyond me.

So today, Jared came home for lunch--he has his own garage--and told me about a cute little blond girl who came in that morning to get the oil changed in her Jeep. Well, my heart did a flip. I hadn't heard Jared sound interested in somebody in a long time. He handed me the card she'd given him, and I saw that she owns an embroidery shop. Double yay!

"Now, don't get your hopes up, Mom," Jared told me. "She's already got a boyfriend."

"I can't help it," I said. "I haven't seen your spirits this high in ages. Plus, this girl owns an embroidery shop?" I thought it was a win-win. Maybe she and her boyfriend weren't all that serious.

Jared laughed. "If Marcy hadn't had a boyfriend, then, yes, I'd have asked her out before she left my garage. But, as it was, she helped bring me out of the rut I've been in. She went through something similar to my relationship with Susan. Like me, she thought she'd never find love again...but when she did, she realized she's much happier with this guy than she ever was with the other one."

And he went back to work happy...even whistling a little tune! So I had to see this Marcy for myself. I went to her shop and was greeted by a massive Irish wolfhound. Oh, he was a beauty! As for Marcy, we talked and laughed, and I confided that I wished she hadn't met her new beau before she'd met Jared. I told her it was selfish really because I thought she'd make a terrific daughter-in-law. She said that for today we'd pretend I was her daughter-in-law and she'd give me a twenty-percent discount on the knitting supplies I was buying. I told her I knew I should refuse her generous offer, but for one day, I wanted a daughter-in-law who would make me proud.