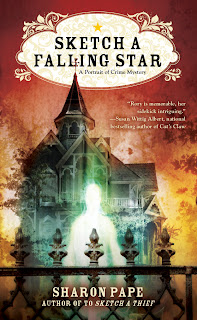 Rory McCain from the Portrait of Crime mystery series interviews Jaye Saylor from the upcoming Crystal Shop series, both by Sharon Pape.

Hi everyone, I'm Rory McCain - you may already know me as the sketch artist and private investigator in the "Portrait of Crime" mystery series. Today I'm borrowing a journalist's hat to interview Jaye Saylor, owner of Crystal Clear, the new crystal and gemstone shop in Sedona,
Arizona.

Rory:   "So Jaye, what made you decide to move to Sedona?"

Jaye:  "I don't think I ever decided to move there. I just followed my best friend Sierra who vacationed here  and refused to come back home. Of course her name wasn't Sierra back then. She likes to change her name to suit the circumstances in her life. She's what some folks call a free spirit. Of course I've heard less charitable people say she's one card shy of a full deck. But when it comes to being a friend, there's no one better.

Rory: What does Sierra do for a living?

Jaye(laughing): She opened a bakery called Cravings, even though she'd never baked anything before in her life. She has a really optimistic "can do" spirit. As it turned out, she has a lot of natural ability too, which explains why I've gained a few pounds since  moving here.

Jaye:  Unfortunately, Sierra and I got off to a rocky start, which is bound to happen when a murder victim winds up in your new backyard.

Rory:  Who was the victim?

Jaye:  The owner of the only other full service bakery in town. As you can imagine, that immediately made Sierra suspect number one with the local police. So we had to take it upon ourselves to find the killer and clear her name.

Rory:  There's a lot  of talk about Sedona's psychic vortexes. Do you believe these energy fields exist?

Jaye: I'm not sure I believed in them initially, but it's the only way to explain some of the strange things that have happened to us here.

Jaye (with a mischievous smile):  No, I wouldn't want to spoil the fun.

Rory: Have you made any new friends here?

Jaye: Yes, most of the people who live here year round are wonderful. Quirky, but wonderful.

Rory:  Can you tell us about some of them?

Jaye:  There's Daniel Yazzi. He's a full-blooded Navajo. Great guy and easy on the eyes as the saying goes.  He grew up on a reservation to the north where most of his family still lives, but he and his cousin live in Sedona now. They've built up a good business taking tourists on Jeep rides through the Red Rock. (Jaye laughs) And then there's Edith and Esther, eighty year old fraternal twin spinsters. They're as different looking as any two people can be, but they've spent their whole lives dressing alike and pretending to be identical.

Rory: It sounds like you're really settling in there, Jaye. May I come back and talk to you again some time?

Jaye: Sure, anytime. You might also like to interview Sierra, Daniel, the twins, or some of the other characters who live here. Please invite your readers to stop by my crystal shop on August 20th to find out how we cleared Sierra's name, as well as a lot more about all of us in A is for Amethyst, from Berkley Intermix. The cover for the first book should be up on our website soon - sharonpape.com

You can visit Sharon at sharonpape.com
You can find Sharon on Facebook
Submitted by Unknown