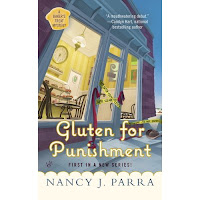 Hi, I’m Toni’s Grandma Ruth. I’m a “retired” journalist. Good journalists don’t retire they fade away…like type in an old book. I’d like to think my pages aren’t that yellowed…yet. Since I was given a mandatory retirement, I’ve taken up publishing my own blog. Newspaper stories aren’t written like they used to be. I remember standing in the rain for hours waiting for a contact to emerge from their office. Then there was that time there was a blizzard and I tromped through five-foot high drifts up hill both ways to get to the office to type up my story and turn it in on deadline. Those were the days.
Nowadays kids simply take out their phone and write a query and poof all the public records at their fingertips. If you ask me, they’ve gotten lazy. No one talks to each other any more. Except us senior citizens. We aren’t home all day for no reason. We have stations and times set to keep an eye out the window and see what’s going on in the neighborhood.  If anything seems amiss, we call each other and find out what’s going on.

It is the senior network that provides me with the most interesting local news and human interest stories. All those youngsters want is to “go viral.” Well, we’re here to tell them that there is more to life than pictures of cats or the latest “reality” stars ridiculously written escapades.
I was up for a Pulitzer once but that Guy—what’s his name? Something White took the Kansas votes. Can’t have two Pulitzer winners in a state as backward as Kansas. It wouldn’t look good.

Besides, I was the first and only female reporter at that time. Sure, there was the household tips columns, but even those were written by more men than women.

Times have changed and I’m all for keeping up. They took away my driver’s license but I don’t let that stop me. I’ve got my scootaround and I know how to drive it. You can usually find me at the courthouse in the public records section, or at the health club in a water aerobics class or at the Oiltop Senior Citizen Center. That place serves good lunches and there’s nothing like a game of cards after to keep the mind going.

That’s my life in a nutshell. I should say that was my life, until my baby died and left the homestead to her daughter Toni. Now I love Toni to death but that girl went off to the big city and came back with some weird notion that eating wheat was bad. Even though we are surrounded by wheat farmers she set up a gluten-free, wheat-free bakery. I tried to warn her but she didn’t listen and the whole situation turned to murder. Thankfully my connections in the community allowed me to help Toni investigate. (Honestly the investigation got my journalistic juices flowing.) I’ll get back to it once I take a nap. After all I am retired. Are you part of a neighborhood watch? I know I'm not the only one. Well, I’ll leave you with this old fashioned gluten-free dessert – baked apples. Until next time~ Ruth of Blue Castle. 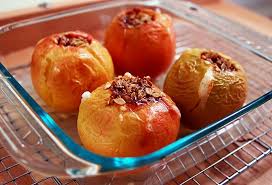 Heat over to 350 degrees F. Wash and core apples, leaving the peel intact except for the top. place 1/2 tablespoon butter in each core. Place 1/2 tablespoon brown sugar on top of butter. sprinkle with cinnamon to taste. Place in a butter pie pan. Bake for 60 min until soft. Serve warm with a dollop of vanilla ice cream.
Submitted by Nancy J. Parra