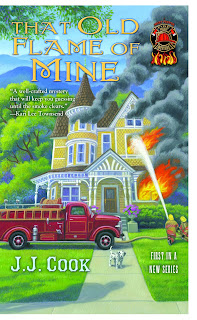 My Own Book
By Hero
The mascot of the Sweet Pepper Fire Brigade
from That Old Flame of Mine
By J.J. Cook
www.jjcook.net


Okay. I can understand why everyone thinks the ghost of the old fire chief, Eric Gamlyn is cool and everything. I like him too! He can play hide and seek like you wouldn't believe!

And Stella. I like Stella a lot! I really love barking at her as she rides away on her Harley. I've peed on the tires a few times, but let's keep that between you and me, huh?

The volunteer firefighters at the fire station are nice. They give me chips and cheese puffs when Stella isn't looking. Yesterday I had my first chicken leg. YUM!

The volunteer firefighters in Sweet Pepper, Tennessee adopted me for their mascot. I'm special too! I'm not not just an afterthought, some random character who makes readers smile. I'm not a year old yet, but I know I'm not comic relief. I'm made for better than that.


That's why Stella is sending me and my mom, Sylvia, to dog firefighter school. We're gonna rescue people too. I love kids and I think they like me too. I want to be there when there's a fire to help them - and a little puppy love goes a long way after the bad stuff is over too!

So that's why, when the folks at Berkley Prime Crime read about me, they wanted me to have my own book. I'm so excited! It's called Hero's Journey and it will be out in December. It's all about me and why I get to ride on the front seat of the engine with Stella. It's full of stuff about me and a big adventure I had when I helped catch a bad guy.

There isn't a cover to share yet, but when it's ready, I'll be back to tell you about it. In the meantime, I have to work on my training. Being a hero isn't easy, you know.

Well, I have to go. Don't want to be late for lunch! See ya!