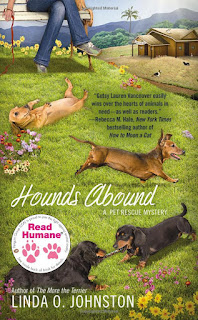 Hello.  I’m Lauren Vancouver.   I’ve appeared here at Killer Characters before, and I’m pleased to be here again.  This time, I want to brag a little.  No, maybe a lot.
You see, the third adventure of mine that has been told in a book, HOUNDS ABOUND, was chosen to be part of a very special program that Penguin Group (USA), parent to the book’s publisher Berkley Prime Crime, started last year and engaged in again this year: Read Humane.
HOUNDS ABOUND is actually the second chronicle of mine chosen for the Read Humane program.  Last year, my first story, BEAGLEMANIA, was also a Read Humane book.
What does Read Humane mean?  Well, the Penguin Group has made a substantial contribution to the Humane Society of the for each year the program has existed.  The funds are designated to help support the HSUS Animal Rescue Team, which rescues animals from all sorts of difficult situations, everything from natural disasters to man-made horrors like puppy mills and animal fighting.
The stories chosen to be part of Read Humane are republished in a special edition that has the Read Humane seal on the cover.
I will of course continue to do everything I can to rescue animals myself, including being the chief administrator of my wonderful no-kill pet shelter in L.A.’s San Fernando Valley, HotRescues.  Somehow that has also led to my having to solve murders now and then, but I’ll do whatever needs to be done to save animals.
Including expressing my pride in having another story of mine chosen to be part of the amazing Read Humane program.
By the way, I’m not the only blogger here at Killer Characters who’s part of Read Humane.  Other members also appreciate the value of saving animals!
Submitted by Linda O. Johnston