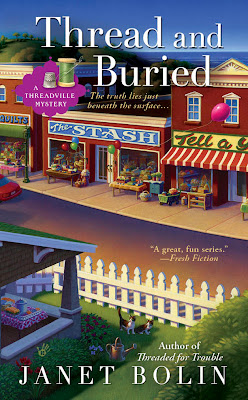 In Threadville , Pennsylvania , known for its textile arts courses and shops, everyone’s stories are connected by a common thread—even the ones ending in murder…

Every town has a legend. For Threadville, it’s the story of Snoozy Gallagher, the hotel owner who disappeared thirty years ago with a bag full of stolen jewelry, never to be heard from again. That is, until now—when Snoozy’s loot is discovered buried behind Willow Vanderling’s embroidery shop, In Stitches.

When villagers mysteriously become ill, and a body shrouded in materials from Threadville shops appears in the exact spot in Willow’s back yard where the treasure was, Willow needs answers. And who left two kittens in her yard about the time the body was dumped there? But she gets in over her head and has to unravel the entire deadly mystery, or she might get tangled up as the killer’s next victim…

For more information or for links to buy a copy of the book, visit Janet Bolin's website. 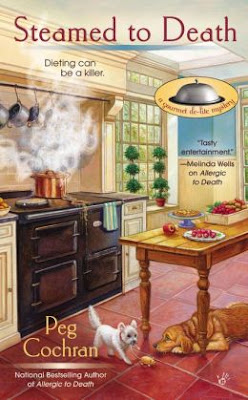 Gourmet health food caterer Gigi Fitzgerald is used to helping dieters drop a dress size. But when her clients start dropping dead, she’s ready to switch her chef’s hat for a detective’s cap and track down a killer. . .

Aging soap star Felicity Davenport is looking to revamp her image, and she’s using Gigi’s Gourmet De-Lite to help her shed a few of those unwanted pounds. Having such a high-profile client is definitely good for business, but when Felicity is found murdered in her sauna, things start getting too hot for Gigi to handle.

The list of suspects is a mile long, and Gigi’s best friend, Sienna, is at the top. Refusing to let her friend get blamed for a crime she didn’t commit, Gigi is determined to hunt down the real killer. But, as the case reaches a boiling point, Gigi will have to be careful or she could be the next one getting burned.

For more information or for links to buy a copy of the book, visit Peg Cochran's website. 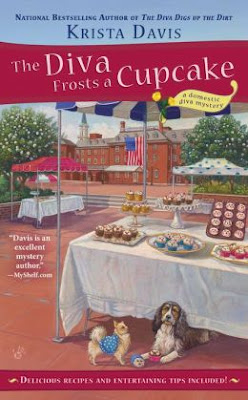 The Diva Frosts a Cupcake
by Krista Davis
Available June 4, 2013

Sophie Winston and her BFF, Nina Reid Norwood, share a sweet spot for animals. So Sophie is delighted to help when Nina cooks up Cupcakes and Pupcakes—a fundraising event for animal shelters.  All the local bakeries will be selling treats, with the profits going to pups and kitties in need. But Old Town is in for a whole batch of trouble when a cupcake war erupts between two bakeries…

Tongues wag and tempers rise when a partner leaves Sugar Baby Bakery and unveils her competing cupcakery, Sugar Mama, precisely as the fundraiser gets under way. Just as it seems nothing else can go wrong, Sugar Baby’s sole remaining employee is found dead. Suspicion falls on the feuding owners, but the scrumptious new guy in town is also raising some eyebrows. Now Sophie and Nina have to sift through the clues and discover who isn’t as sweet as they seem…


For more information or for links to buy a copy of the book, visit Krista Davis's website. 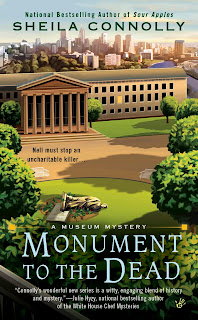 Monument to the Dead (Museum Mystery #4)

As president of the Pennsylvania Antiquarian Society in Philadelphia, Nell Pratt relies on the generosity of philanthropists. But when someone starts killing benefactors, it’s Nell’s turn to come to their aid…

When Nell reads the obituary of a former board member, Adeline Harrison, she makes a mental note to send flowers and doesn’t think twice about it—until FBI agent James Morrison shares his suspicions about the nature of Adeline’s death. It turns out that a number of other members of the local cultural community have died in the last few months, under similar circumstances.

Soon Nell uncovers what seems to be a plot to rid Philadelphia of harmless, elderly philanthropists—but why? If she can figure out the killer’s motive, she has a chance of stopping the misanthropic murderer before another do-gooder is done in… 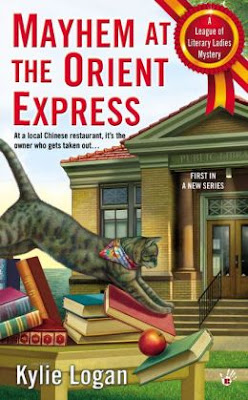 Mayhem at the Orient Express
By Kylie Logan
Available June 4, 2013

Most folks aren't forced to attend a library book discussion group, but that's what happens to B&B proprietor and ex-Manhattanite Bea Cartwright, hippy cat lover Chandra Morrisey, and winery owner Kate Wilder after a small-town magistrate has had enough of their squabbling.  South Bass, an island in Lake Erie, is home to an idyllic summer resort, but these ladies keep disturbing the peace.

Their first read is Agatha Christie's "Murder on the Orient Express," and that sets their mouths watering.  The Orient Express is the island's newest Chinese restaurant.  They might not agree on much, but the ladies love the food there!  Too bad their meal is spoiled when the restaurant's owner, Peter Chan, is killed.  Now, with Christie as their inspiration, the League of Literary Ladies has a real mystery to solve...if they can catch a killer without killing each other first.

For more information or for links to buy a copy of the book, visit Kylie Logan's website.