Why Does This Keep Happening? 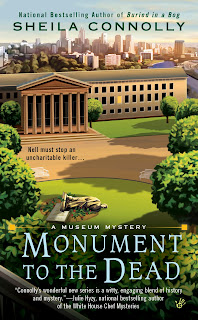 Nobody told me that this job would be dangerous.  I mean, really—I run a historical society, where we collect documents and artifacts, and where most of our patrons are researchers looking for someone who has been dead for a couple of centuries.  Our building is only a few blocks from the heart of Philadelphia, close to some of the most upscale hotels in town, so it's not exactly a shady neighborhood.

So how is it I keep finding myself involved in murder investigations?  And fending off attacks?  This is ridiculous.

But I'll admit that recently, I became involved in a case of a serial killer because I more or less discovered it—even before the FBI.  To his credit, my go-to Special Agent James Morrison had his suspicions, but it was my research that uncovered more crimes than even he suspected.  You might not realize it, but institutions like ours collect a lot of information about people, or at least, about our members and definitely about our prospective donors and board members.  We know who is friends with whom, what their property is worth, and what collections they inherited from their great-grandparents that we would really like to add to our own.  We don't snoop or pry, exactly, but we pay attention to these details because that's what keeps non-profits like ours going.

Whoever thought it would lead to solving murders?  Yes, plural.  But what we have at the Society is information that the FBI and the police don't.  Put all our resources together and it's a lot easier to solve crimes.  That's why James and I work so well together.

But this time around, things didn't work out exactly as planned.  We uncovered quite a few suspicious deaths over the past year or more, but it took us just a bit too long to figure out who the killer was—and James paid the price.  He'll be all right, but I still feel guilty that the situation got out of hand the way it did. I should have figured it out sooner.

I would be happy to give up crime-solving, but these things just keep happening…