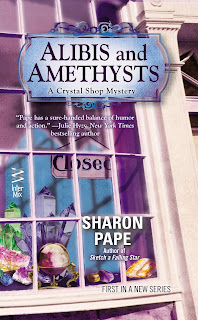 by Jaye Saylor from Alibis and Amethysts, the first book in the new Crystal Shop Mysteries, by Sharon Pape

Hi everyone, my name is Jaye Saylor. I own a crystal and gemstone shop in Sedona, Arizona.  Now that's a sentence I'd have bet would never cross my lips. I owe the big upheaval in my life to my best friend Sierra. If it had been up to me, I probably would have stayed where I was, teaching geology at a college on Long Island. It was a nice, stable job with regular hours, a decent salary and benefits. I hope you're not groaning like Sierra did when I told her I'd chosen geology for my major. To be honest, her reaction was predictable. Sierra is one of those free spirits who goes where her spirit leads her, even though it sometimes leads her, and me, into a mess of trouble

Sierra and I met as dorm mates in college. No one thought we'd last a month. A few people didn't even give us a week. I don't think it would be an exaggeration to say that we were the least likely pair on campus to become best friends. Of course our relationship had its share of speed bumps.  I hate to admit that most of them were my fault. I was an experienced architect by the time I met Sierra -- an architect of walls, fortresses and crocodile-filled moats. The fact that we are now as close as sisters is in no small measure due to Sierra's generous heart and fundamental belief that all things are possible.

In any case, I was rolling along contentedly in my daily rut when Sierra called from Sedona. She was in Arizona visiting a college friend. On a brief side trip to Sedona, she fell in love with the place. She made the decision on the spot to move there and open a bakery, even though she didn't know the first thing about baking. Typical Sierra. She was calling to give me a head's up, because she wanted me to leave my nice, secure life and follow her off the cliff, lemming style. "How do you expect me to make a living out there?" I asked, hoping to trip her up with reality.  I should have known Sierra would have it covered.
"You can open a crystal shop," she said. "That's related to geology. All you have to do is learn the New Age properties attributed to the stones and you're in business."


"It's about as related as a pig to a petunia," I protested. We went on for a while in that vein. The upshot of it all was that I moved to Sedona and opened a crystal shop. It took a bit of adjusting for me - okay, a ton of adjusting. But after six months, I was settled in and loving my new life there. Of course that's when we found the dead body.

Visit Sharon's website to read an excerpt: www.sharonpape.com
Stop by and say "hi" one Facebook.
Submitted by Unknown