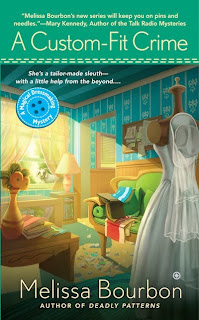 the Dressmaking Mystery Series by

Tessa Cassidy doesn’t do most things in what would be considered a ‘normal’ fashion.  Take her wedding to the Bliss’s sheriff, Hoss McClaine, for example.  She wanted me to make her wedding dress, and I agreed.  Little did I know she’d show up with her own accessories—namely a cowboy hat with a veil and rhinestone-studded cowboy boots.

Okay, maybe I did know she’d want something more cowgirl than Manhattan.  She is my mother, after all.

I thought about putting down my own red Frye-booted foot and saying no to making a dress that could have worked for Laura Ingalls Wilder, but I didn’t.  Mama deserves happiness with Hoss, and she deserves the dress she wants.

So her calling off the wedding because of the murder that just happened to take place in Buttons & Bows was, well, it’s something I’m determined to make right.  Hoss, and his son, Deputy Sheriff Gavin McClaine, are both just doing their jobs by looking at me as a possible suspect.  A dead body in my bathroom, and me with a motive...  Any sheriff worth his salt would have to look long and hard at me, too.

I can’t blame them for doing their job.  But I can help them along by trying to find out what really happened that day in Buttons & Bows, and if I’m really lucky, I’ll be able to get Mama and Hoss back on track and jumping the broom.  If any two people were meant to get hitched, it’s them.


After a year of hard work in her Texas hometown, Harlow Jane Cassidy’s dreams are finally within reach—if she can just get it all done in time…

Harlow’s designs will be featured in a big magazine spread, but she only has a

few days to finalize her collection. Plus she’s busy helping to plan her mother’s upcoming wedding, playing host to her old friend Orphie, and avoiding a competitive Dallas designer set on stealing Harlow’s ideas. Harlow’s making it all work—until someone breaks into Buttons & Bows and the rival designer is found dead.

But when a near miss makes it clear that Orphie could be the next victim, Harlow will have to untangle the threads of evidence if she wants to save her friend, her mother’s wedding, and her business from becoming fashion road kill…