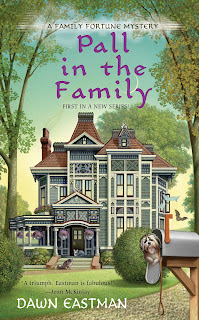 by Mac McKenzie from "Pall in the Family", first in The Family Fortune Mystery series by Dawn Eastman

Well, it’s finally happened. The book is out. Crystal Haven has been buzzing about it for months now, mostly due to Violet Greer, our resident pet psychic, and her nonstop publicity campaign here in town. I had to issue her a ticket for harassing tourists. I never give tickets anymore, but I caught her foisting her card into the hands of a toddler! She seems to think the book will be the "big break" the town needs to regain its former glory as the best known psychic town in the Midwest.

I'm Mac McKenzie. I grew up in Crystal Haven and now I'm a homicide detective in the county sheriff's office. I wasn't thrilled to return to Crystal Haven in a professional capacity and I was even less thrilled when Clyde Fortune showed up.

Clyde.  In a word...stubborn.  In another word...frustrating.  Also...beautiful and beguiling.  We have a bit of a history together.  She's a cop in Ann Arbor, but she's on leave from the force and moved back to town for the summer. While walking a dog, she stumbled across a dead body!  In Crystal Haven!  It was impossible to keep her from mucking around in my murder investigation. Then her whole wacky gang of family and friends got involved to the point that I considered locking them all up until the case was solved.

After the whole incident was over, I thought things would calm down. I should have known better. I hoped she would drop this crazy idea of allowing a journalist to tell the story of the murder in Crystal Haven, but it seemed like the more I tried to talk her out of it, the more interested she became in the idea. Women!

Violet Greer happens to be Clyde's aunt and they agree on almost nothing. For awhile I thought that Vi's enthusiasm for the project might have put Clyde off the whole idea. I was so wrong. The one time I relied on family discord was the one time they saw eye to eye.

I worry that once the citizens of Crystal Haven read it, there could be riots in the streets, or at least a lot of grumbling about Clyde. She's notorious enough without letting the whole town know exactly what happened - and what she thinks of them. I've read the book, and not everyone will be thrilled with what she has to say. But will she listen to me? No.

Well, what's done is done, right? I'll just have to deal with the fallout as it comes. Have you ever tried to change someone's mind and failed miserably?