by Danny Nicolson, Holmes County Tourism Board columnist & future Pulitzer Prize-winning journalist, from the Amish Quilt Shop Mysteries by Isabella Alan
Danny: Sheriff, thank you for agreeing to this interview.

Mitchell: You didn’t leave me much choice. You were camped out in front of my house this morning, and when I stepped over you to go to the sheriff’s department, you beat me there. How many traffic laws did you break on the way there? You're lucky one of my guys didn’t catch you in a speed trap.

Mitchell: That’s what they all say.

Danny: This interview will be recorded.

Mitchell (sigh): Fine. Let’s get it over with.

Danny: What can you tell us about the murder of Amish woodworker Joseph Walker of Rolling Brook? What has you investigation uncovered?

Mitchell: Danny, you know I can’t comment on an ongoing investigation.

Danny: You must have suspicions. 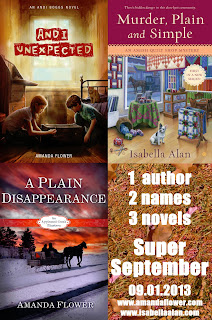 Danny:  Is Angela Braddock one of those people you are suspicious of? She just inherited the neighboring shop to Walker’s, and she is in a property dispute with him, and she’s the one who found the body. Her fingerprints are all over the weapon. You couldn’t have a better suspect even if she killed Walker in the middle of the street right in front of you!

Mitchell: No comment. The case is still pending. In fact, I should get back to it right now.

Danny: Wait! How will this murder affect Amish and English relations in Rolling Brook and in Holmes County overall?

Mitchell: That remains to be seen.