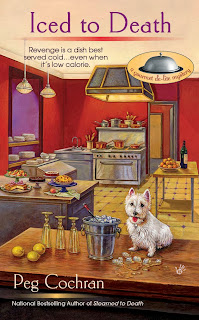 Hello.  Detective Bill Mertz here.  I’m a character in Peg Cochran’s Gourmet De-Lite series.  So far I’ve been in Allergic to Death and Steamed to Death.  I’ve kind of fallen for another character in the book—Gigi Fitzgerald.  I wish Ms. Cochran would make me a little more debonair.  I tend to freeze up when Gigi’s around.  She’s so pretty and such fun.  She doesn’t seem to mind that I’m not the smoothest guy in the world.  Hey, I grew up with a bunch of brothers so girls are a bit of a foreign species to me.  At least I know enough not to punch her on the arm or jump out at her and scare her--stuff my brothers and I used to do to each other all the time.  Give me some credit for that at least.
I had a bit of a panic when Declan McQuaid opened his restaurant in town.  He’s very good-looking and has a way with women.  Or so it seems judging by how they act around him.  I know Gigi really cares for me, but I know she’s tempted, too.  There’s a song that plays on the radio—something about if you like her you should put a ring on it.  I wish I could get up the nerve to do that.  I don’t know what Ms. Cochran has in store for me in Iced to Death.  I’ll have to wait until March to find out.  I just hope I’m the one who gets the girl.


Have you ever missed out because you were too shy to let someone know you liked them?
Submitted by Peg Cochran