Flying TVs and Other Strange and Fantastic Things 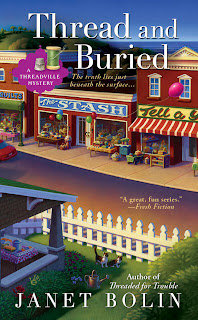 by Willow Vanderling from the Threadville Mystery series by Janet Bolin

Leaves rustled in the tree behind me, but the day was barely windy.

My friend looked up at the sky. “There goes a TV,” she said.

Startled, I followed her gaze.

A large, black bird, its wings in a flattened V, soared over our heads and rose on an updraft near the cliffs above Lake Erie.  Oh, that’s what she meant by “TV.” A turkey vulture. 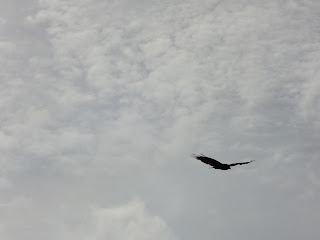 Smaller birds streaked by, their wings back, their tails long. “Kestrels,” she said. “Like the TVs, they’re migrating.”

We’d come to the cliffs hoping to see migrating Monarch Butterflies, but they’ve been in tragically short supply all summer.

Wait, what was this tiny flying thing? It zipped toward us, then almost reared up in as if in fright, and darted away. I caught a glimpse of its pale little belly. Definitely not a Monarch. “A hummingbird,” my friend told me. “There goes another one.”

It must have flown by very quickly. I didn’t see that one at all.

Suddenly, my friend stilled and aimed her binoculars above the lake. “There’s something you don’t often see.” Her voice was soft with awe.

Way out over the lake, a string of cloud separated itself from the dark underside of heaped-up cumulous clouds. The string twisted and turned. “A funnel cloud?” I asked her, almost as startled as I’d been at the thought of flying TVs. A tornado? Maybe the next TV that flew past our heads would be a television… “Are we in danger?” I was ready to run to my car and drive inland, fast. 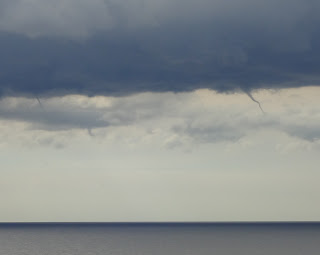 “No,” she said, still peering at the thing through her binoculars. “The day’s too cool, and those clouds are going to shield us from sunlight and lower the temperature more, and for that funnel cloud to develop into something bigger, it’s going to need more energy from the sun. It’s not going to get it this late in the season.  I don’t think the tip of that funnel will reach low enough to become a waterspout out there in the lake, and even if it did, it would be harmless unless we were in a rowboat right underneath it. Just watch.”

We did. The funnel cloud undulated almost like a thread, very appropriate for those of us who lived in Threadville.

I was the one who spotted a second funnel cloud not far from the first. I managed to snap a picture, and then both funnel clouds fizzled out.

Bits of cloud drifted down from the darkest clouds, the clouds thickened, the sunshine disappeared, and we saw no more funnel clouds.

The TVs, though, the turkey vultures, continued to soar and swoop. I thought they should be concerned with migrating, but they seemed to be playing in the wind. Or maybe they were waiting for that eagle to fly back and urge them on, to wherever they were supposed to go.

Like some of the birds and butterflies, I’ll getting ready for winter. I won’t migrate, and I can’t soar on the wind, but I guess it’s time to put away the summer clothes and get out the winter ones. And make some new ones . . .

How do you prepare for winter?

You can read about how Willow solves a murder in the latest Threadville Mystery, THREAD AND BURIED, available from these booksellers. Read the first chapter here.

And keep your eyes open for information about the fourth Threadville Mystery, coming in June, 2014.
Submitted by Janet Bolin