Through a Mother's Eyes 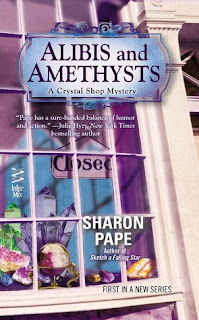 by Kyah Yazzi from Alibis and Amethysts, the first book in the new Crystal Shop Mysteries by Sharon Pape

My parents named me Kyah and that's how I was known until I gave birth to my son Daniel. From that day forward, I became known as Daniel's mother. For me there was never a finer name. I live on the Navajo reservation near Tuba City, Arizona where I was born and raised  like my parents before me, and their parents before them and so on back through too many generations to recall. I raised my son here as well, with the love and often meddlesome help of my extended family.
From the beginning, Daniel was a child of light and joy, his eyes twinkling with curiosity and mischief. He was never happier than when he was running around with his cousins and friends. I loved to watch him at play. My mother told me I didn't discipline him enough, and I have to admit she was probably right. It was hard to be angry with him when he looked up at me with those bright, guileless eyes.
Daniel always had a great affinity for animals. I remember the day I left him in the care of his older cousin and went to the store. When I arrived home carrying bags of groceries, I was promptly knocked over by two dogs who were chasing a cat through our house. When I'd left for the store thirty minutes earlier there hadn't been any animals there. These three proved to be the first of many creatures who populated our lives over the course of his childhood. He brought home so many stray and injured dogs and cats, bunnies and lizards that at times our home looked more like an animal clinic than a human residence. When he was ten he told me he wanted to be a veterinarian when he grew up. My heart stopped cold. Not because of his career hopes, but because it forced me to acknowledge that someday he would leave the reservation. And me.  I don't know why it caught me so by surprise. I'd seen a growing number of our young people venture out into the world to make a better life for themselves. I reminded myself that some of them came back to the rez, diplomas in hand, to bring that better life home with them. Two of my cousin's children had recently returned to teach in our schools.  I held onto that comforting thought with a death grip.
As it happened, by the time Daniel graduated from high school he no longer wanted to be a veterinarian. He'd decided he was too soft at heart for the job. Having watched him grieve for every animal that died while in his keeping, I understood completely.  So when he headed off to college in Flagstaff, it was with an open mind to the future and the optimism that had always fueled his life. And I got over his leaving  just as mothers everywhere do. The happiness in his voice whenever I spoke to him couldn't fail to make me happy too. That's just how it is with a child.
Daniel learned a lot about himself while he was away. Although it came as no surprise to me, he realized he'd be miserable in a job that kept him indoors. The mere thought of spending a large chunk of his life inside a building made him feel as if he was suffocating. Unfortunately, that epiphany eliminated a large number of employment possibilities.
After college, he and his cousin George put their heads together and came up with a plan. They worked odd jobs and saved whatever they could, until they had enough to buy a used, open-air Jeep. Then they started a business running guided tours through the Red Rock country of Sedona. It wasn't long before they added a second Jeep. And now they have two brand new ones and a storefront office in Upper Sedona. I'm so happy for him. For me too. He's close enough to make visiting easy. Of course, like all mothers, I wouldn't mind seeing him more often than I do. But that's part of a mother's learning process, and I think I'm making progress every day.