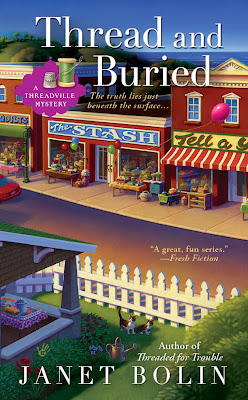 by Willow Vanderling
from the Threadville Mysteries by Janet Bolin

In Threadville, you will find, as you might expect, lots and lots of thread. In my machine embroidery boutique, In Stitches, I sell embroidery thread. Across the street, my best friend, Haylee, sells sewing thread in her fabric shop, The Stash. Down the street at Batty About Quilts, Naomi, who is one of Haylee’s mothers (she has three, all of whom have more or less adopted me—does that mean I have four mothers?) sells all the thread you might need for piecing a quilt or sewing the top to the bottom, with batting between. Other Threadville shops specialize in yarn, notions, and home décor.

People come to Threadville from miles around to shop and learn.

But we have a problem. No, not only the murders that you may have heard about and that I’d just as soon not talk about, but…um…I hate to say it. Some of us may be collecting just a little too much.

Knitters and crocheters always need more yarn, while quilters and seamsters (to prevent confusion, I shy away from the word “sewers”) need more fabrics. The buttons we have on hand because we bought several kinds for the previous project (because we couldn’t make up our minds in the store) never work for this one.

And then there’s my downfall, embroidery thread. As any machine embroiderer knows, we often do not have all the right colors for our next project, and we need new colors, usually several. 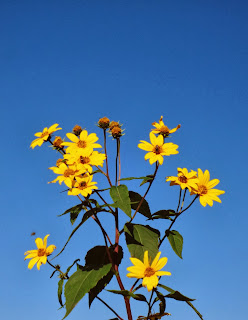 I like turning photos into embroidery designs. I manipulate the artwork to limit the number of thread changes, but still, working from a natural palette means I need many subtle variations in hue.

I keep adding new colors and types of embroidery thread, and I’ve ordered taller racks to hold the thread. But somehow, I don’t think I’ll ever have enough.

How about you? Do you have a favorite craft that requires keeping more on hand than you’ll use next week? And all you foodies out there, you’re not immune—what’s in your spice rack?

You can read about how Willow solves a murder in the latest Threadville Mystery, THREAD AND BURIED, available from these booksellers. Read the first chapter here.

Visit Janet at facebook and twitter. And keep your eyes open for information about the fourth Threadville Mystery, coming in June, 2014.
Submitted by Janet Bolin