Introducing Jessica Fletcher...Have you seen this woman before? 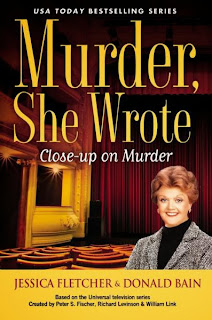 By Sheriff Mort Metzger
"Murder, She Wrote"
(Close-up on Murder is #40 in the series)

Hi! Cabot Cove Sheriff Mort Metzger here. If you were a fan of the television series, “Murder, She Wrote,” in which yours truly actually solves the murders in our small town, admittedly with occasional assistance from my friend, the mystery writer Jessica Fletcher, you might want to take a look at her long-running book series. Donald Bain and Mrs. F. have been writing about her adventures since 1989. If my math is correct, that means that this coming new year, 2014, will mark the 25th anniversary of “Murder, She Wrote” in print. Not bad for a former schoolteacher, which my pal, Mrs. F. was years ago. 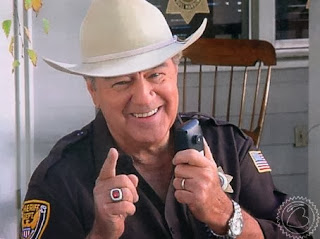 Now, me, I’m a former New York City cop, but I bet you already knew that. Came up here to Maine when the previous sheriff, Amos Tupper, decided to retire and move back to Kentucky. After the crazy round-the-clock shifts of the NYPD, I figured it was time to enjoy a quieter life in a picturesque seaside village in New England. Clean streets. Friendly townspeople. Low crime rate. Little did I know! Some people say Cabot Cove is the murder capital of the country. It’s not, of course, although sometimes it can seem that way. (Just thinking about it gets me nervous. You can’t see me, but I’m fanning my face with my Stetson right now.)

I usually have crime in our town pretty well under control. But a sheriff in Cabot Cove gets a lot help whether he wants it or not. The rumor mills here are busier than a garbageman sweeping up confetti in Times Square on a windy New Year’s Day. There’s Sassi’s Bakery, Mara’s Luncheonette, the local post office, and I better not forget Loretta’s Beauty Shop. Those ladies (and they’re almost always ladies) have a lot to say about anything that goes down here. Mrs. F. likes to put in her two cents, too. I hate to admit it, but she has her share of pretty good ideas—sometimes. 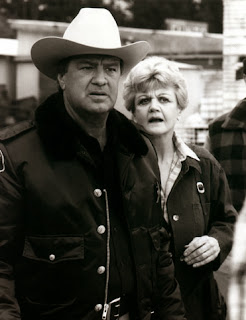 If you’d like to read one of the books I star in, keep an eye out for Mrs. F’s latest, Close-up on Murder. A movie company comes to town and makes my life a living nightmare. And then we find a body.

P.S. My wife Adele, who you never saw but whose voice you might have heard on the telephone in the show, decided country life was not for her. She picked up and moved back to the city. I was pretty broken up about my ex leaving until I met and married Maureen. My current wife is a gorgeous redhead who loves to cook. She’s a big fan of those cooking channels that encourage their viewers to experiment in the kitchen. Lucky me! Well...most of the time. There was that cake with the corn nuts on it.

There are 40 books in the “Murder, She Wrote” series with three more under contract. The books, original mysteries that have never been televised, are by Jessica Fletcher, a fictional character, and Donald Bain, a real-life one. “Murder, She Wrote” is published by Obsidian, a division of NAL/Penguin. It is among the longest series of books in print based on a television show, and the only one (as far as we know) where all the books are written by the same author. If you want to borrow a book from a library (unless it’s Don’s home library) or buy it from a bookshop, look for “Murder, She Wrote” under F for Fletcher. Go figure!
Submitted by Donald Bain and Renee Paley-Bain