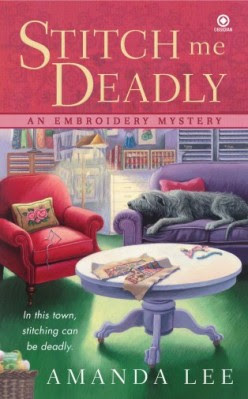 My best friend, Marcy Singer, moved to Tallulah Falls just a few months ago and opened an embroidery specialty shop called the Seven-Year Stitch. Prior to setting up shop here on the coast of Oregon, she was an accountant. It took a little arm-twisting, but I convinced her to follow her dream of opening her own business and to give our little town a try. And I think she's happy here. Despite a couple of...um...let's call them setbacks...she's doing great.

I've known Marcy since we were roommates in college, and I love her like a sister. The only trouble is that she has either the worst taste in or the worst luck with men than any woman I've ever known. You'd think that a woman with Marcy's adorable looks would have men falling all over themselves to date her--and she does, but for the most part, they're jerks.

Take David. He and Marcy were engaged for several months. The guy seemed nice enough when Blake and I met him--Blake is my husband, by the way--but there was something a little off about David, you know? Something we couldn't quite place, but it was there. Well, lo and behold, on the day of the wedding, the scuzz bucket stood her up! And he didn't even have the decency to let her down himself--he had his best man Tony do it hours after the ceremony was to have begun. He just let her stand there in the beautiful gown her mom had made her and be humiliated in front of all those people. Poor Marcy! I still feel sad when I think about that. Sad, and angry enough to punch David in the nose.

That happened about a year before Marcy came to Tallulah Falls. Naturally, after she got settled in here, I did a little matchmaking. I mean, she didn't know anyone...and how was she going to meet men in an embroidery shop? Besides, I thought Marcy and Blake's and my friend Todd Calloway would be perfect together. Todd owns the Brew Crew across the street from our coffeehouse, MacKenzies' Mochas. He's sweet as can be--not to mention gorgeous--and he has also had his share of bad relationships.

Anyway, I introduced Marcy and Todd on the night of her grand opening party for the Seven-Year Stitch. They hit it off, and I thought things were going fairly well. Then, before you know it, Detective Ted Nash starts hanging around, and I start seeing sparks fly between Marcy and him. Well, that made me a little protective of Todd, you know? I mean, I didn't want Marcy breaking his heart in seventy-five pieces like local attorney Miss-High-and-Mighty Riley Kendall had. And, man-oh-man, when Marcy found out about that, she went ballistic! She acted like I'd set her up to be Todd's rebound without caring about her feelings at all. Let me tell you, that was so not the case! Todd was well over Riley by the time I fixed him up with Marcy...or, at least, I'm pretty sure he was.

So, what do you guys think about matchmaking? Should you play Cupid for your friends? Or should you simply let them flounder out there on their own?
Submitted by Gayle