Hi everyone!  I’m Lucky Jamieson.  I guess if you’ve visited Snowflake, Vermont, you know all about me and the By the Spoonful Soup Shop.

I spent most of my younger years trying to escape to the big city, but when my parents were killed in a car crash on an icy road, I came home.  It was a tough time, especially since I learned I had inherited my parents’ soup shop.  I was nervous about taking over their business and agonized a lot over whether I had made the right decision. 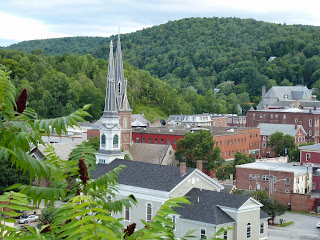 You might not know this, but in A Spoonful of Murder, the body of a winter tourist was discovered behind our restaurant.  She had been bludgeoned to death and was found frozen in a snow bank.  Our fabulous chef was arrested for the murder and then, well, our business almost went belly up.  People stayed away like we had the plague.  We were the focus of a lot of bad publicity, and my grandfather Jack’s health began to suffer.  It was a tough time indeed!

There were a couple of good things that happened that winter though.  I was able to reconnect with my best friend from childhood, Sophie Colgan.  Sophie had been angry that I left town and went off to college but we were able to make up and are now really close.  I started seeing Elias Scott, our handsome town doctor.  Elias was my big crush when I was young, but the age difference between us then was too great.  Now that I’m older, well, almost thirty now, but old enough, Elias took an interest in me.

Snowflake is a very peaceful village . . . normally.  But in the second book about our town, A Broth of Betrayal, murder came calling again.  And this April, you can read more about all of us in A Roux of Revenge.

I wonder now why I ever left.  I couldn’t be happier to be home again, running the soup shop with my grandfather and our fabulous chef.  I hope if you decide to visit Snowflake, you’ll stop in at the By the Spoonful Soup Shop and say ‘hi’ to me and all our regulars.  We have the best food in town – not to mention a lot of mysteries, excitement and thrills.

Email ThisBlogThis!Share to TwitterShare to FacebookShare to Pinterest
Labels: A Broth of Betrayal, A Roux of Revenge, A Spoonful of Murder, Connie Archer, Snowflake, soup lover's mysteries, soup shop, Vermont