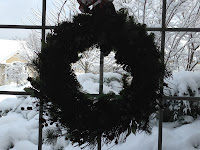 Gigi peeled back the curtain and peeked outside.   Snow was falling gently, being blown in swirls by the brisk wind.  She let the curtain drop back in place.  She had her coat lying over a chair and her hat and gloves on the seat.    Bill Mertz was picking her up shortly, and they were going to Sienna and Oliver’s for Christmas.   It was little Camille’s first Christmas.
The doorbell rang, and Gigi scurried to answer it.  Mertz brought a rush of cold air in with him, and flakes of snow were melting in his hair.  He enveloped Gigi in a big hug.
“Merry Christmas,” he said, his eyes sparkling.
Before Gigi could return the greeting, his lips were on hers.  They stayed like that until Reg gave a short bark—as if he was clearing his throat or saying let’s get going.
Mertz and Gigi laughed and broke apart.
“Come on, Reg.”  Gigi bent down and clipped on his leash.
Mertz took Gigi’s hand in his, and they went out to his waiting car.

Light spilled through the windows of Sienna’s carriage house onto the snow outside.  The door was outlined in little white lights with a huge boxwood wreath in the center.
Sienna threw open the door before they even rang.  “Merry Christmas!”
Gigi and Mertz stepped inside.  A huge fire roared in the fireplace, and tantalizing aromas drifted from the kitchen.  A ten foot tree, resplendent in lights and ornaments, dominated the middle of the room.
Oliver shouted a greeting from the kitchen.  “Glass of champagne?”  He asked.
Gigi and Mertz both said yes.
“Come here a second,” Mertz said linking his arm through Gigi’s.
“Where?”  Gigi looked around.
Mertz pointed to the arched doorway where a ball of mistletoe decorated with red ribbons hung from the ceiling.
He maneuvered Gigi underneath and gently kissed her.  “I have something to ask you,” he murmured against her lips.
“There you are, you two,” Oliver burst into the room carrying a tray of bubbling champagne glasses.  Sienna was right behind him with an array of delicious hors d’oeuvres.
“Later,” Mertz whispered.
They joined their host and hostess and each lifted a glass.
“Here’s to a Merry Christmas,” Oliver said.
“And a wonderful new year,” Mertz replied giving Gigi a warm grin.

To show our appreciation for our readers, we're giving away one book each day for the whole month of December. It's our gift to you. Every day one lucky person will be chosen from the people who left a comment that day. You have 31 chances to win! But you have to leave comments! So come back every day and leave a comment for a new chance to win.

Today's randomly selected winner will have the choice of one of my books. You can choose from the ones that or out or, if you want, wait for A Fatal Slip (written as Meg London) or Iced to Death which come out in February and March.