Falling in Love with Jessica Fletcher 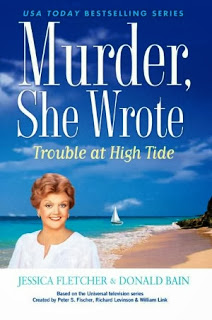 A number of years ago I was assigned to investigate the vicious murder of Marjorie Ainsworth, the reigning grande dame of British mystery writers, whose latest novel, Gin & Daggers, had just been published to rave reviews—although there was some controversy over whether she had utilized the services of a ghostwriter. Ordinarily, such a case would have been left in the hands of the local constable, but because of Ms. Ainsworth’s fame, Scotland Yard felt that someone of higher rank was more appropriate. As a chief inspector I was handed the case and traveled to Ms. Ainsworth's imposing manor house in the town of Crumpsworth.

Among the weekend guests at the house was another well-known writer of crime novels, Jessica Fletcher, an American visiting from Cabot Cove, in the state of Maine. I viewed Ms. Fletcher the way I viewed everyone else who had been in the house that weekend—as a suspect. Of course, I couldn’t come up with a motive why this American writer, a dear friend of the victim, would have wanted to thrust a dagger into Ms. Ainsworth’s body while she slept, nor could I assign a motive to any of the guests at that early stage of the investigation.

I did some boning up on Jessica Fletcher’s career and came to learn that not only did she write best selling murder mysteries, she’d been involved in the solving of more than a few actual cases. Armed with that knowledge, I decided to enlist her help in bring Marjorie Ainsworth’s killer to justice, and invited her to join me for tea at Brown’s Hotel, in central London. While her observations of what had occurred at Ainsworth Manor were astute and useful, I simultaneously found myself personally attracted to this beautiful, intelligent woman.

Once the Ainsworth case had been solved, Jessica prepared to return home to Cabot Cove, but not before we had agreed to find other opportunities to spend time together. It wouldn’t be easy; the Atlantic Ocean separated us. But occasions did arise.


I was her guest one year for Thanksgiving in Cabot Cove (A Fatal Feast), and she once brought a contingent of friends to my family castle in Wick, Scotland (The Highland Fling Murders). There were other instances, too.  While Jessica vacationed on the lovely island of Bermuda, a series of murders took place, and because Bermuda falls under British control I was dispatched to aid the local authorities (Trouble at High Tide). There was also an opportunity for me to travel to Washington, D.C. when Jessica was visiting there, and where the murder of a leading politician occurred (A Vote for Murder). And, of yes, she came to London when a friend launched a new airline linking the U.K. and the States (Coffee, Tea, or Murder). We'll be spending New Year's Eve with each other, but that's still in the future (Death of a Blue Blood).


The problem is that every time we’re together a corpse shows up, which gets very much in the way of advancing any feelings we might have for each other. There’s no impediment to romance like a dead body.


Too, her local sheriff, Morton Metzger, has gotten his dander up when he felt I intruded into one of his investigations. And I’m always aware that her dear friend, Seth Hazlitt, Cabot Cove’s beloved physician, scrutinizes me as a possible suitor for Jessica’s affections. Whether or not he views me as competition for her hand is conjecture on my part.

I don’t know where our admiration for each other will lead. That vast ocean will always be there to keep us apart. And our respective professional lives get in the way of picking up and leaving our homes—Jessica’s success as a crime novelist, and my honored post with The Yard. But I have no doubt that should one of these tangibles change, neither of us would be adverse to taking our feelings to the next level, perhaps even--dare I hope--culminating at the altar. In the meantime, I fervently hope that the next time that I’m with this lovely lassie, murderers will find another time and place to ply their wicked deeds.

As part of Killer Characters Season's Readings, we are giving away a signed hardcover copy of Trouble at High Tide, which features Chief Inspector George Sutherland. For a chance to win, leave a comment below or answer this question in the comments section: