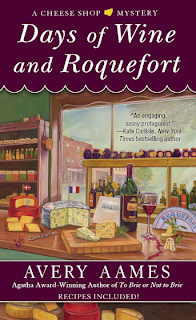 I’m pleased to announce that my good friend, Jenna Hart and her culinary bookshop in Crystal Cove, California, are thriving. I haven’t had time to visit yet, but Jenna and I have been in touch via the Internet. Jenna and I met when she was working at Taylor & Squibb, an advertising agency in San Francisco. My cousin and I were thinking about doing some additional publicity for Fromagerie Bessette—The Cheese Shop, as the locals call it—but we decided that going global wasn’t really what we were after. We like to keep our business cozy and personal. Recently, Jenna told me that The Cookbook Nook is going to host a grilled cheese competition. Delilah, my friend who owns The Country Kitchen, which is cattycorner to The Cheese Shop, will be so jealous when she hears that. She has been hoping to host a grilled cheese competition for ages. She wants to do it on a regional scale. Jenna’s competition is local—only eight competitors. Jenna confided that the winner for the last eight years is probably going to win again. Last year, the woman, who is pretty high-strung, wound up in a YouTube video because she started a spatula fight. Can you believe it?

Here in Providence, things are thriving, but I’m a little forlorn. After Matthew and Meredith married, he, the twins, and Rocket, their French Briard, moved out of my house. Now it’s just Rags and me. Jordan…well, he’s out of town for a bit. I can’t go into those details. It’s sort of secret.

Loneliness, however, can be great for getting projects done. I’ve moved an old desk that I inherited out of my den/office into the garage so I can refinish it. In addition, I’ve changed the twins’ room into a guest room, and I’m going to have my first guest, a friend of Matthew’s who used to be a sommelier like him. She’s moving to Providence to take on a new position at the Shelton Nelson Winery. It seems like a step down to me, but Matthew says she’s very excited about the prospect.

Change…I guess we all have to face it. Do you like change?
What do you do when you’re blue?

By the way, Jenna’s author is the same as my author, except they have different names. How can that be? Well, one author’s name (mine) is a pseudonym. Avery Aames is fictional, like me, but she and Daryl Wood Gerber are one and the same. It stretches the imagination, doesn’t it? 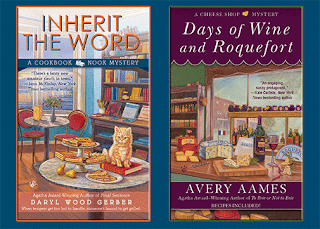 
Days of Wineand Roquefort, the fifth in A Cheese Shop Mystery series, Febraury 2014

Click this link  to read a preview or see a trailer: Avery Aames
Submitted by Daryl Wood Gerber a.k.a. Avery Aames