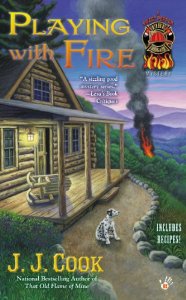 Chocolate, Peppers, and My New Life
By Fire Chief Stella Griffin
From Playing with Fire
By J.J. Cook
www.jjcook.net

I’m not much of a cook.  I’m great with toast, and microwave food. I didn’t need anything else when I lived in Chicago. I even got by with it when it was my turn to cook at the fire station. Stew, soup, chili – all of those are great fresh from the freezer to the microwave.

Now that I live in Sweet Pepper, Tennessee – food is a big deal. They have this huge pepper festival every year that I’m expected to participate in as fire chief. It’s kind of like a community service. New, better, more exciting hot pepper recipes are the keywords.

I don’t know what I’d do if it wasn’t for the ghost who lives with me. Eric Gamlyn can be a little moody, but he’s great cook! He’s original and inventive – if a little messy and not much for cleaning up after himself. I don’t mind too much. He makes me look good at the festival! We won a blue ribbon this year!

Here is one of Eric’s recipes for hot chocolate with cayenne pepper. It's great on a cold winter night!

Instructions:
Mix water, cocoa powder and sugar (or substitute) in a saucepan. Slowly bring to a simmer over medium heat, stirring constantly. Cook until mixture thickens. Mix in remaining ingredients and heat, but don’t boil. Serve hot with cinnamon sticks to garnish!

WIN A PRINT COPY OF PLAYING WITH FIRE BY LEAVING A COMMENT!

Welcome to Sweet Pepper, Tennessee. Nestled in the Great Smoky Mountains, it’s home to the hottest and sweetest peppers in the world—as well as at least one ghost and a hotbed of secrets…

Fire Chief Stella Griffin is working to solve the mysterious death of her predecessor, Eric Gamlyn—who also haunts her cabin. Yet the more she learns, the more burning questions she must answer. Just as Stella thinks she has a lead from Deputy Chum, someone snuffs her hopes—and the lawman.

Adding fuel to the fire, Stella’s parents soon arrive—with her ex-boyfriend—hoping to persuade her to return to Chicago. Now Stella is torn between the life she left behind and uncovering what happened to her ghostly friend. But she’d better think fast or more than her investigation could go up in flames…
Submitted by Unknown