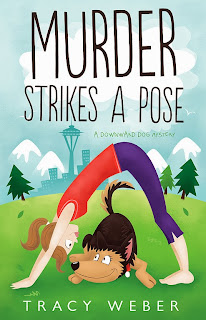 By Michael from the Downward Dog Mystery Series by Tracy Weber

Well, crazy fits. Girlfriend might be overstating it. Kate and I have only had one date, and I won that night out in a bet. But what a date. I’m still smiling five days later.

Kate acts all tough, but she’s really a sweetheart underneath all that bravado. Take Bella, for instance. Bella’s personality is closer to Cujo than Rin Tin Tin. Yet when her owner was murdered outside Kate’s yoga studio, Kate snagged her from the police so Animal Control wouldn’t take her. Now that’s my kind of woman.

Kate says she’ll never adopt Bella—she even tried to con me into taking her—but anyone with more than two brain cells can tell she adores that skinny, ill-mannered German shepherd. And I should know. I hang out with dogs and their people every day here at my store, Pete’s Pets.

Kate has become obsessed with catching the killer, and I’m worried. I know her father was a cop and all, but unless yoga teacher training is a heck of a lot different than I think, she’s not a trained investigator. And what’s she going to do if she catches the killer? Roll him up in a yoga mat?

I’ll never tell her I’m worried, though. Her best friend warned me that Kate looks for any excuse to dump and run, and I’m not about to give her one. I’ve been itching to ask her out on a second date, but her friend says that I should wait for Kate to ask me out this time. I feel a little guilty for scheming behind Kate’s back, but it’s for her own good. Kate and I would be great together. Even Bella loves me. After all, I’m the Cookie Man. And who can argue with a dog as smart as a German shepherd?
Speaking of which, here comes Kate now. Or at least here comes Bella. I’m pretty sure that’s Kate getting dragged like a sled behind her.

Check out MURDER STRIKES A POSE, the first in the Downward Dog Yoga Mysteries. Available at Amazon http://www.amazon.com/Murder-Strikes-Pose-Downward-Mystery/dp/0738739685/ref=sr_1_1?ie=UTF8&qid=1385096350&sr=8-1&keywords=murder+strikes+a+pose and bookstores everywhere!

About the Author
Tracy Weber is a certified yoga teacher and the founder of Whole Life Yoga, an award-winning yoga studio in Seattle, where she current­ly lives with her husband, Marc, and German shepherd, Tasha. She loves sharing her passion for yoga and animals in any form possible. When she’s not writing, she spends her time teaching yoga, walking Tasha, and sip­ping Blackthorn cider at her favorite ale house. Murder Strikes a Pose is her debut novel. Connect with Tracy at her author page http://tracyweberauthor.com/ or on Facebook http://www.bing.com/search?q=facebook&src=IE-TopResult&FORM=IE10TR

About MURDER STRIKES A POSE
Seattle Yoga instructor Kate Davidson tries to live up to yoga's Zen-like expectations, but it's not easy while struggling to keep her small business afloat or dodging her best friend's matchmaking efforts. When George, a homeless alcoholic, and his loud, horse-sized German shepherd, Bella, start hawking newspapers outside her studio, Kate attempts to convince them to leave. Instead, the three strike up an unlikely friendship. Then Kate finds George's body. The police dismiss it as a drug-related street crime, but Kate knows he was no drug dealer. Now she must solve George's murder and find someone willing to adopt his intimidating companion before Bella is sent to the big dog park in the sky. With the murderer on her trail, Kate has to work fast or her next Corpse Pose may be for real.