by Hobo, from Sketcher in the Rye, book four in Sharon Pape's Portrait of Crime Mysteries 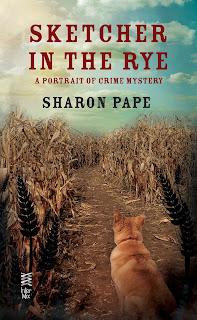 I've heard my humans make something they call "New Year's Resolutions," so I decided to give it a try myself.  First on my list, I resolved to eat more. I really liked that one, but when your meals and snacks are controlled by others it's not an easy one to keep. I tried begging harder and staring at the humans with more desperate pleading in my eyes. I even tried sucking in my jowls to look scrawnier, but that's pretty much impossible when you're always wearing a big, shaggy coat of fur.

My second resolution was to sleep more, but after a few calculations I realized that I already sleep, doze or nap nineteen hours a day. My third resolution is one I'm determined to keep. I won't ever fall in love again, no matter how cute the pig or how perky her little, corkscrew tail. With the exception of my devoted  humans, I'm done with love. This big, old mushy heart of mine cannot survive being broken again.

My fourth resolution was to catch the miserable squirrel who lives in our backyard. He loves to taunt and tease me. Unfortunately it's already January third, and he's still mocking me. He must have made a resolution to drive me crazier, because now when I go outside he doesn't immediately scamper up a tree. He chatters at me and waits until I'm almost upon him before making his getaway. To make matters worse, yesterday he pelted me with acorns from his winter stash.

squirrel. Wow, I'd never actually thought about it. She was right, I needed to have a plan. Did I want to

shake the annoying, little rodent like one of my stuffed toys? Did I want to eat him? Yuck, blech, I gagged

at the thought. I'd be picking ratty, squirrel fur out of my teeth for a month. And without opposable thumbs,

flossing is a nightmare. No, I didn't want to kill the squirrel, I just wanted to win the game once in a while!

That's when I had an epiphany. It wasn't a life and death struggle; it was just a game! I can't believe I didn't

realize that sooner. After all, I've always been a live and let live kind of fella. I had to think with my head and

not my emotions.  After a lot of consideration and a nap,  I came up with a plan to show Mr. Squirrel he's

not playing with a fool. I have to stop barking my head off the second I see him; it clearly hasn't scared him

out of our yard. I have to be stealthy and walk on my tippy toes like Tom trying to sneak up on Jerry in that

TV cartoon. Then I'll knock him over with one of my big, slobbery  kisses. That oughta put things in

perspective for the irritating, little acorn-shucker.  And next year, no more resolutions. They're too much