Book Clubs Can Be Brutal 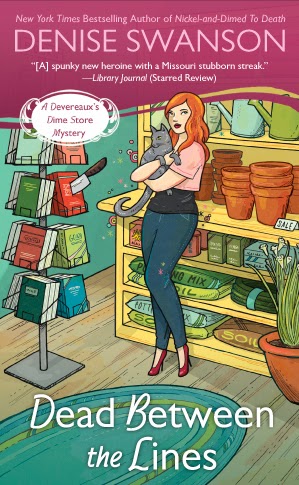 A conversation with Devereaux Sinclair and Poppy Kincaid as told to Denise Swanson author of the Devereaux's Dime Store mysteries.

“Dev, did you say a book club is holding their meeting in your store?” My best friend Poppy Kincaid asked as she handed me a glass of wine.

“Yep.” I took a sip of the Shiraz, savored the dark berry flavor, then added, “Xylia asked if her group, could use the dime store for its May meeting and after a little negotiation with the club’s president, I said yes.”
“What, the knitters and scrapbookers weren’t exciting enough for you?” Poppy smirked.
“Hey,” I protested. “Those craft groups spend a lot of money at my place. Don’t knock it.” I looked around Gossip Central, Poppy’s bar and raised a brow. “We all can’t have thrilling customers like those drunks beating the heck out of your pool table.”
“What?” Poppy swiveled on her stool, spotted the offenders, and marched over to take care of them.
It was funny to watch the tanked-up cowboys cower as my friend lit into them. Poppy looked a lot like fairy princess, but her she was proud of her reputation as our hometown’s bad girl. Especially since her father was Shadow Bend’s chief of police. Poppy and her dad’s relationship was a lot like the one I had with chocolate, I knew I should learn to control myself around it, but it was a lot more fun not to.
When Poppy returned from her mission, the sloshed men had slunk off to their table and were attempting to sober up enough to drive home by consuming a greasy plate of wings and a pitcher of water.
As she slid back onto her stool, Poppy said, “My beef with book clubs like Oprah’s is that they all insist on only reading literary books.”
I snickered when she used her fingers to indicate quotation marks around the word literary, then said, “I think there are groups who aren’t opposed to genre novels.”
“What’s your group reading?”
“The Stepping Out Book Club’s selection is a volume of poetry by a local author.” I knew this because the group had purchased the book through me. That, along with paying me to provide the refreshments, had made the event profitable enough for me to host.
“Is the poet speaking at the club?” Poppy asked as she dug a tube of lip-gloss from the pockets of her tight black jeans.
“Yep.” I twisted the end of my ponytail around my finger. “Lance Quistgaard is honoring them with his presence. His tome is called Ode to a Small Midwestern Town so I think it might be about Shadow Bend.
“I wonder what the book club members will discuss,” Poppy mused. “I mean, how much controversy can there be in poems about a small town?”
Little did we know, that poetry could be murder.

If you’re interested in Dev's latest adventure, read all about it in Dead Between the Lines, which debuts March 4th. It’s currently available for pre ordered from amazon, bn.com, and at http://www.mysterylovers.com and http://www.auntagathas.com