Small Town Mayor Speaks Out (and check out what's coming up!) "Murder, She Wrote" (Mayor Shevlin appears in The Maine Mutiny and other books in the series.)


I never intended to become the mayor of Cabot Cove. My wife, Susan, and I were contented residents of this lovely town, me with a successful small printing business, and Susan as the go-to travel agent for anyone with vacation plans.

But as the town grew, and discovered the problems that accompany growth, town leaders felt that City Hall needed a new mayor with a business background. Former Mayor Sam Booth had campaigned on the theme that he would “do nothing” to change Cabot Cove. 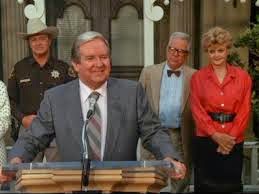 “Do Nothing Sam” was a fine gentleman, but his problem was that he resisted change even when it was swirling around before his eyes. I, on the other hand, promised to do my best to meet the challenges of population growth without losing what has made Cabot Cove the ideal small town that it’s always been. Even though Sam and I gave the voters a clear choice, I wasn’t sure I could steal the election away from such a popular candidate, and was pretty surprised when I did. Sam retired from the field gracefully, and I presented him with a symbolic “key to the city” as thanks from its grateful citizenry.

The key to Cabot Cove’s success, I know, are the people who make the town what it is, good, honest men and women who take pride in where they live and care about one another. We have a terrific sheriff in Mort Metzger, a former NYC cop, who keeps our crime rate low. We have fine physicians including Seth Hazlitt who’s delivered half the babies in Cabot Cove and who practices what he terms “chicken soup medicine,” common sense remedies for which his patients are thankful.

We have some good restaurants and food shops (and more to come next year). Perhaps you’ve heard of Peppino’s for a fine Italian meal, Sassi’s Bakery whose ovens turn out the region’s best cinnamon buns, Mara’s Luncheonette on the dock where the food is not only superb, the gossip is just as tasty and filling. Loretta’s Beauty Shop is thriving as is Charles Department Store.

And, of course, we have Jessica Fletcher.
As many devoted readers know, Jessica is the author of a series of best selling murder mysteries. Her fans circle the globe, and she has played a role in the solving of a number of real life murders, sometimes in concert with Sheriff Metzger (and occasionally to his chagrin), and sometimes on her own when traveling to promote her books.

Having someone like Jessica as a neighbor is a cause for pride and celebration, although her natural modesty causes her to downplay her success and fame.

Naturally, when Jessica must travel she consults with my wife, Susan, who sometimes tells me that she’s almost reluctant to book a trip for our resident celebrity because, if the past is any indication Mrs. Fletcher will end up smack dab in the midst of a murder investigation wherever she goes.

2014 marks 25 years of “Murder, She Wrote” in print. There are 41 books in the “Murder, She Wrote” series with two more in the hopper. The books, original mysteries that have never been televised, are by Jessica Fletcher, a fictional character, and Donald Bain, a real-life one.

Leave a comment below and Mayor James T. Shevlin will put your name into a drawing to receive a certificate, suitable for framing, naming you (or whomever you like) as an Honorary Citizen of Cabot Cove. 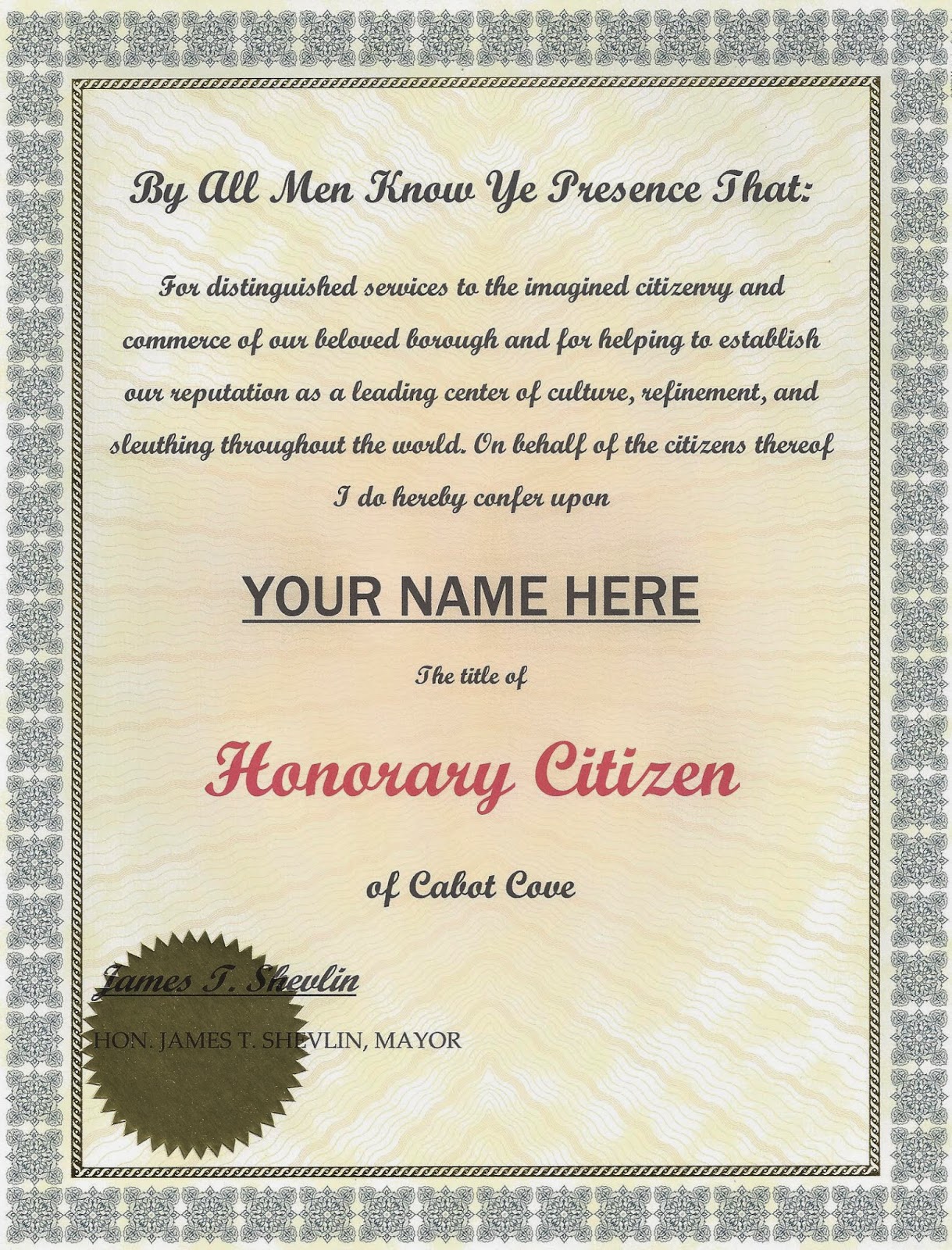 If by chance your name isn't selected, you'll have another opportunity for this and other goodies, during the months of June and July, when Killer Characters is having a "Cozy Reads of Summer Giveaway!" Leave a comment on the day's blog and you could win a book, some swag, and more! Winners will be selected each day! Good luck!