June is a sweet time for a great read from Killer Characters!

Summer is here! During June and July, we're having a Cozy Days of Summer Giveaway!
You could win a book or some swag.
Scroll down to see the details and today's prize.

Tucked away in the Finger Lakes region of Upstate New York is the charming town of Gracious Grove, where time moves slowly, gossip spreads quickly, and the scones are to die for…

When her fashionable Manhattan restaurant goes under, Sophie Taylor retreats to her grandmother’s cozy shop, Auntie Rose’s Victorian Tea House, where serenity is steeped to perfection in one of her many antique teapots. The last thing Sophie expects is a bustling calendar of teahouse events, like her old friend Cissy Peterson’s upcoming bridal shower.

Not everyone is pleased with the bride-to-be’s choice of venue—like Cissy’s grandmother, who owns a competing establishment, La Belle Epoque, and has held a long-simmering grudge against Rose for stealing her beau sixty years ago. Tensions reach a boiling point when Cissy’s fiancé’s mother dies while sampling scones at La Belle Epoque. Now, to help her friend, Sophie will have to bag a killer before more of the guest list becomes a hit list…

When Angela Braddock enters her quilts in an Amish auction, she never expects one of her neighbors to end up going, going, gone. Angie is finding her niche as the new owner of her late aunt’s Amish quilt shop, Running Stitch. But as the summer is winding down, so is business. To bolster support for the shop, Angie decides to sell her quilts in the Rolling Brook Amish Auction, including some of her aunt’s most prized works. The quilts promise to be a hit—but the gavel comes down on the lively event when Angie stumbles upon the body of township trustee Wanda Hunt behind a canning shed. The cause of death: a poisoned blueberry fry pie from Rachel Miller’s bakery table. Now Angie’s closest friend is a murder suspect. With Angie taking the lead, she and the other women of her aunt’s quilting circle set out to patch together the clues and stop a killer set on shredding the simple peace of Rolling Brook.

In the latest novel in the national bestselling Domestic Diva Mystery series, it’s beginning to look a lot like murder. The holidays are domestic diva Sophie Winston’s favorite time of year. But this season, there seem to be more mishaps than mistletoe. First, Horace Scroggins tumbles from a balcony during his office Christmas party. Then, Sophie’s neighbor takes a fall from his ladder while decorating his roof with lights. But it’s the cookie swap that really starts her wondering who’s naughty or nice. Sophie arrives at the annual event with high spirits and thirteen dozen chocolate-drizzled gingersnaps. But when an argument erupts and a murder ensues, it becomes clear that the recent string of events is anything but accidental. Now Sophie has to make a list of suspects…and check it twice!

ISBN: 978-0425257135
Between the challenges of her position as president of the Pennsylvania Antiquarian Society in Philadelphia and of taking her relationship with FBI agent James Morrison to the next level, Nell Pratt has got her hands full. Nevertheless, when a powerful developer approaches the Society to make sure the old dairy farm he wants to level is not hiding any archaeological or historical surprises that could derail the project he’s planning, Nell decides to make time to personally accompany him to the proposed site. But when they get to the property, they stumble upon a startling discovery—a body floating face down in a pond. The dead man turns out to be an amateur history enthusiast, who may have uncovered secrets about the farm that got him killed. Now it’s up to Nell and James to get to the bottom of things before there are more deadly developments…

It’s early October, and hordes of visitors have descended on the tiny, celebrated village of Threadville, Pennsylvania, to attend a Halloween crafts fair, a zombie retreat, and the wedding of Edna Battersby—dear friend to Willow Vanderling, owner of the chic machine embroidery boutique In Stitches. As a friendly prank for Edna’s wedding, Willow and her friends have fashioned an overly extravagant hoop skirt, complete with lights and music. But in a bizarre turn of events, the garish gown is implicated in a mysterious lakeside murder. Now Willow must follow a trail of glow-in-the-dark thread, delve into ancient Egyptian curses, and creep through a haunted graveyard to unearth a killer—before she becomes the next fashion victim…

Embroidery shop owner Marcy Singer is about to have the rug pulled out from under her. Marcy can’t wait to see the new exhibit at the Tallulah Falls museum on antique tapestries and textiles, including beautiful kilim rugs. But her enthusiasm quickly turns to terror when, the day after the exhibition opens, she discovers a dead body behind her store, the Seven-Year Stitch, wrapped up in a most unusual fashion. The victim appears to be a visiting art professor in town for the exhibit. Did someone decide to teach the professor a lesson, then attempt to sweep the evidence under the rug? Along with her boyfriend, Detective Ted Nash, Marcy must unravel an intricate tapestry of deception to find a desperate killer. 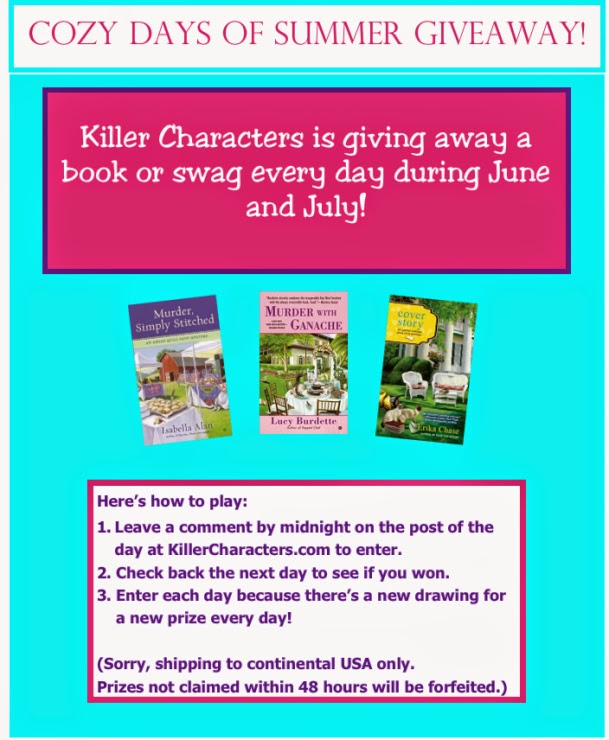 Leave a comment today (with an email address) to win a copy of
THE DIVA WRAPS IT UP.