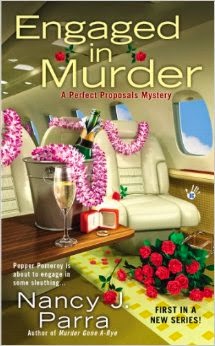 Well, hello there, I'm Pepper Pomeroy and I'm here to talk about my new series. I live in the Chicago area and I was downsized from my last job as an event coordinator. While I was hitting the want ads and the job boards, my sister's boy friend, Warren Evans asked me to help him create the perfect romantic proposal for him to pop the question to Felicity-that's my little sister.
Like so many couples today, Felicity and Warren are inseparable. It's sort of a forgone conclusion that they are going to get married and Warren-like a lot of romantic men-wanted the proposal to be really special.
Warren told me he rented a private jet to fly my sister off for a romantic weekend. My job was to decorate the plane's interior, hire a videographer to record the whole thing and basically ensure that my sister got the proposal of her dreams.
Things were going along perfectly until I went looking for the flight attendant and discovered a man passed out in the third stall of the ladies room. Before I could call security and report him, Felicity arrived and I rushed off to ensure the proposal was perfect.
She said yes!
Champagne was uncorked and congratulations given all around and I waved my sister off to her romantic weekend. Except the passed out guy was still in the ladies room. I know. I checked. When I looked closer, he wasn't so much passed out as passed on...
What a mess. Now everyone in the hanger was suspect except me, of course, because I found him. But the police being suspicious by nature decided that it was Warren who killed the guy. Now, I have to ask you, who stops to kill a guy before asking the love of their life to marry them?
But the homicide detective guys aren't thinking clearly and it's up to me to prove my little sister's fiance is innocent.
There's just one small problem--okay maybe it's a big problem. I'm not really what you would call a detective. But if I can plan an event, I can unplan a murder...right?
Killer Characters is giving away a free book a day - so here is my question to you.  What is the worst wedding disaster story in your life? One person will win a copy of Engaged in Murder, the first in the Perfect Proposal mystery series. Leave a comment to win. Good luck!