The Deadly Days of Summer

Summer is here! During June and July, we're celebrating the Cozy Days of Summer by giving away a book every day. Today, you can win a copy of Crime Rib by Leslie Budewitz. Just leave a comment before midnight — with your email address so Leslie can reach you — to be entered in today's drawing!

An excerpt from Crime Rib, second in the Food Lovers’ Village Mysteries
by Leslie Budewitz

Chapter One
“We can’t replace one of the chefs,” Mimi George said, her voice piercing the gravy-thick air of the Jewel Inn’s banquet and meeting room. “The Grill-off is in two days.”
Two and a half, but who was counting? We obviously had bigger fish to fry. Or steaks, in this case.
“What if,” I said, jumping in where angels fear to tread, “we say there’s been a mix-up and ask them to submit new recipes? Time is short. But if there’s one thing every chef in Montana can do, it’s conjure up new ways to serve steak.”
“There is no mix-up. Simply put, you people have a thief among you.”
Nothing raises the collective temperature of any group more than being referred to as “you people.” I’d had just about enough of Gib Knox and his demands, but we’d invited his TV show, Food Preneurs, to film the Thirty-Fifth Annual Jewel Bay Summer Food and Art Fair, and its centerpiece, the Grill-off, and we were stuck with him now.
And I didn’t need a meat thermometer to know the other committee members were getting hot, too.
“You wait one minute there, young fella.” Ned Redaway crooked a beefy finger in Knox’s direction. “Don’t go accusing folks you don’t know of being a thief.” Ned had run Red’s, the village watering hole, for close to fifty years, and he didn’t tolerate bullies. He’d once had the hair to match his nickname, though what was left of it had faded to an almost colorless fuzz. At six feet tall and two hundred mostly solid pounds, he was still imposing when riled.
“He may be the best-known chef in the state,” Gib Knox said in a voice as smooth as Belgian chocolate. “He may be your big draw. But he’s a thief.” Six-two or better, a dark-haired man graying handsomely at the temples, the TV host and celebrity chef smiled in smug satisfaction. But we could not let “Nasty Knox” portray the village of Jewel Bay, Montana, to the food-loving world as hicks who couldn’t cook and didn’t know better.
“Hang on,” I said, using my hands as stop signs. “I’m sure we can resolve this without any harsh words or accusations. All we need to say is that two of the three chefs proposed similar dishes. Hucks and morels are a natural combination around here. Since the goal is to give our chefs a chance to demonstrate a beef dish with a local flavor, we’ll ask those two for new recipes.”
“Perfect, Erin.” Stacia Duval, the show’s producer, clapped her hands together. A petite dynamo whose chin-length brown bob boasted red and gold highlights, she practically bounced out of her chair with relief. “But who will tell them? It might be uncomfortable for Mimi.”
“You don’t mean Drew Baker? My chef would do no such thing,” Mimi said in disbelief. She’d gone pale blond for summer, and under her tan, she blanched to a matching shade. Normally, she radiated an eye-of-the-storm calmness—no doubt from years of running the Jewel, one of the village’s favorite restaurants—but she was visibly shaken now.
“What about Drew?” Tara Baker’s heels rapped on the parquet floor as she crossed the room to the long table we’d commandeered for our meeting, her long ash blond hair swinging. As always, she wore black, top to bottom. She and Drew had moved to Jewel Bay six years ago, while I’d been away—he to serve as executive chef of Caldwell’s Eagle Lake Lodge and Guest Ranch, she to be the sales and marketing manager. When they divorced, she stayed at the Lodge and he became chef at the Jewel Inn. A highly acclaimed chef, whose dinner service had become destination dining. The crown jewel of a town that called itself The Food Lovers’ Village. Drew and Knox had worked together years ago in L.A., and when Mimi asked Drew if he could entice Knox and EAT TV to film an episode here, he’d readily agreed.
“Mr. Knox has accused my chef—” Mimi began.
Tara’s gray eyes widened.
“I’ll talk to him,” I said. Not that I relished the task of playing the heavy, but Stacia was right. Even mellow chefs, like Drew, tend to be strong-minded. I turned to Tara. “Two contestants in the Grill-off happened to think along the same lines. We’ll ask for new recipes and be back on track.”
“Fine, if you want to sweep it under the rug.” Dressed straight out of a Western wear catalog, Knox wore a gray and white tweedy jacket, Western-cut, over blue jeans. His boots were polished but well worn.
“Drew and who else?” Tara said, her tone guarded. “Which other chef?”
The corners of Knox’s full lips twitched. Was he enjoying making us squirm? “That promising young woman from, what is it, Bear Poop Lodge? Such charming names up here.”

From the back cover:

“Gourmet food market owner Erin Murphy is determined to get Jewel Bay, Montana’s scrumptious local fare some national attention. But her scheme for culinary celebrity goes up in flames when the town’s big break is interrupted by murder…

Food Preneurs, one of the hottest cooking shows on TV, has decided to feature Jewel Bay in an upcoming episode, and everyone in town is preparing for their close-ups, including the crew at the Glacier Mercantile, aka the Merc. Not only is Erin busy remodeling her courtyard into a relaxing dining area, she’s organizing a steak-cooking competition between three of Jewel Bay’s hottest chefs to be featured on the program.

But Erin’s plans get scorched when one of the contending cooks is found dead. With all the drama going on behind the scenes, it’s hard to figure out who didn’t have a motive to off the saucy contestant. Now, to keep the town’s rep from crashing and burning on national television, Erin will have to grill some suspects to smoke out the killer…” 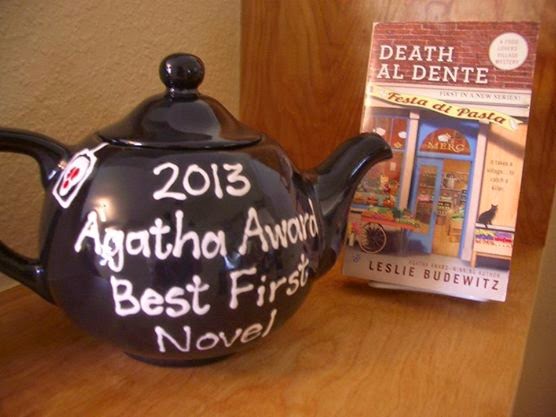 Leslie Budewitz is the national best-selling author of Death al Dente, first in the Food Lovers' Village Mysteries set in northwest Montana, and winner of the 2013 Agatha Award for Best First Novel. Crime Rib, the second in the series, will be published by Berkley Prime Crime on July 1, 2014. Her Seattle Spice Shop Mysteries will debut in March 2015.

Also a lawyer, Leslie won the 2011 Agatha Award for Best Nonfiction for Books, Crooks & Counselors: How to Write Accurately About Criminal Law & Courtroom Procedure (Quill Driver Books), making her the first author to win Agatha Awards for both fiction and nonfiction.

For more tales of life in the wilds of northwest Montana, and bonus recipes, visit her website and subscribe to her newsletter. www.LeslieBudewitz.com And on Facebook: LeslieBudewitzAuthor