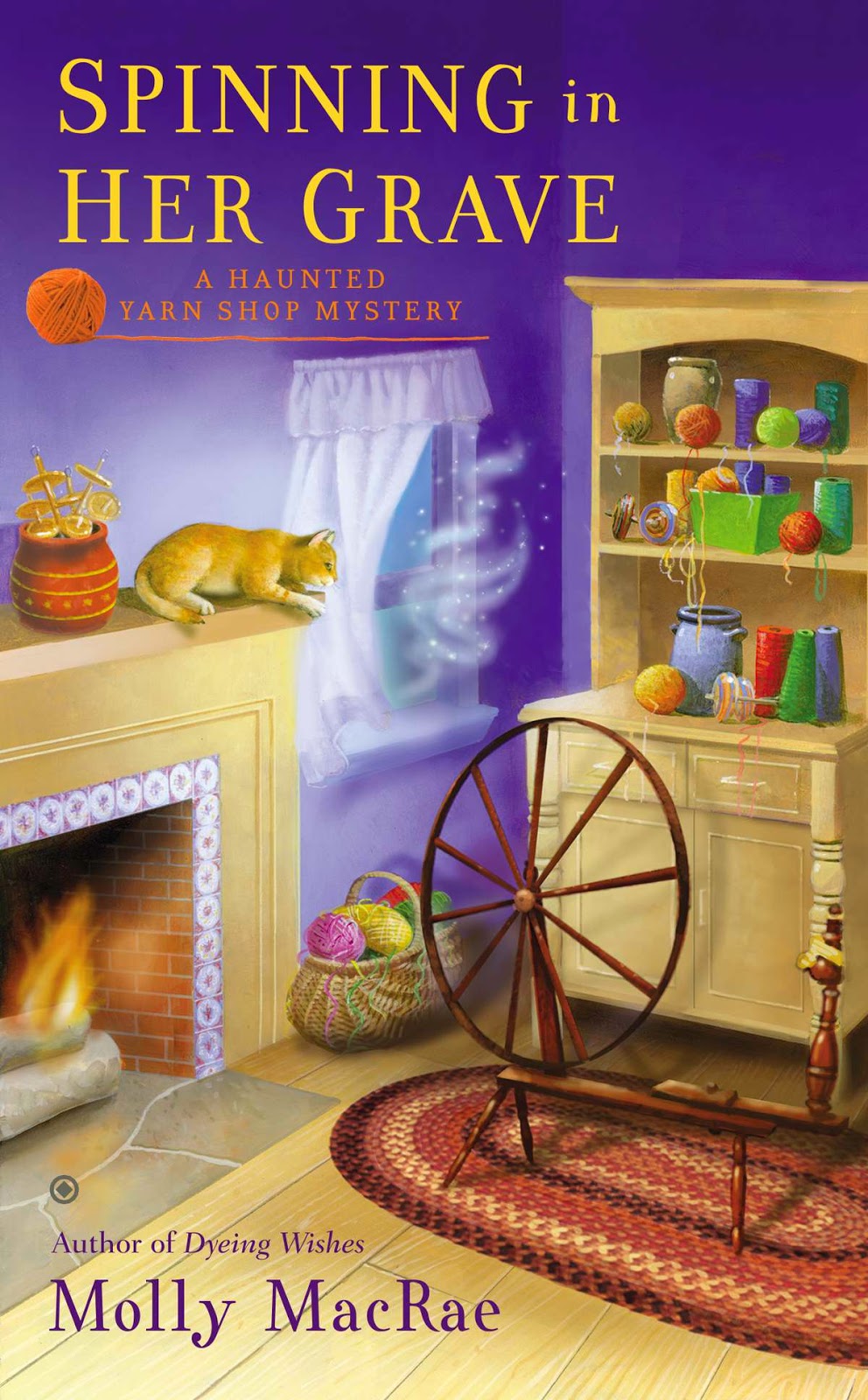 by Kath Rutledge from the Haunted Yarn Shop Mysteries

(Read on for a chance to win in the Killer Characters Cozy Days of Summer giveaway!)

If you’ve met my friend Geneva, then you know that she’s . . . unusual. To say the least. Because she’s a ghost.  Beyond that fact, I don’t know much about her. She claims she doesn’t remember much about her life and she gets upset if I press her to try. From her reaction to the deaths of a young couple earlier this year, there was clearly something traumatic in her own background that she’s blocking out. Her memory, otherwise, especially for dialogue and plot lines from fifty-year-old television shows, is unbeatable. But I’m always looking for historical details she knew firsthand that might help pinpoint when she lived. Here’s a conversation I had with her recently about the reenactment J. Scott Prescott is planning for next weekend.

“So, have you ever heard of this feud Mr. Prescott was talking about?” I asked. “He’s calling it the ‘The Blue Plum Piglet War.’ It happened sometime in the 1820s or 1830s during a boundary dispute that escalated when one guy let his pigs get into another guy’s crops.”

“What was he growing?” Geneva asked.

“Something tasty to pigs. I don’t know. Potatoes?”

“Potatoes, pigs, and pandemonium,” she said with relish.

“Do you remember it?” I asked.

“I’m more interested in your reenactment. You do the same thing every time.”

“And what are we talking about now?”

“The way you rebuff every gentleman caller who shows the least bit of interest in you. Mr. J. Snot Big Shot. He was full of himself, but I saw the way he took your hand.”

“That is absolute baloney.”

“It’s not. He’s sweet on you and you spurned his advance.” Her voice throbbed with pathos for J. Scott.

“I spurned his attempt to put good old boys with guns in our upstairs window and his advance on the building. He’s a slick salesman. He doesn’t give a flying fig about me.”

“No one would with that attitude.”

“My attitude is fine.”

My outer thirty-nine-year-old was willing to pick up a dust rag and move away from that jab. But that went against everything my inner seven-year-old stands for. “Joe,” I snapped. “For your information, I don’t rebuff Joe. We’re having dinner tomorrow night at Mel’s.”

“And there you go.” She threw her wispy hands in the air. “Rebuffing again. But never mind. Loneliness is my lot in death. I’ll never understand your need to exclude a lost soul from the warmth and gaiety of a simple dinner out. But I’ll survive.”

Sigh. I think I could use a few tips for getting along with a melodramatic, histrionic, finicky, persnickety creature, don't you? (And doesn’t it seem like I just described a cat or a teenager?) If you have any suggestions for me, leave them in a comment. I’ll be so grateful!

Leave your advice or a comment by midnight 7/23/14 for a chance to win an audiobook of a Haunted Yarn Shop  Mystery – your choice of LAST WOOL AND TESTAMENT, DYEING WISHES, or SPINNING IN HER GRAVE. Be sure to leave your email address in the comment to be notified in case you are the winner.

Kath Rutledge’s latest adventure is the national bestselling SPINNING IN HER GRAVE, third book in the award-winning Haunted Yarn Shop Mysteries, which are available in mass market, e-book, large print, and audio wherever books are sold.  Watch for Kath in PLAGUED BY QUILT, coming in November 2014, and available now for pre-order.

Visit Molly MacRae on Facebook and Pinterest, or find her the first Monday of each month at Vintage Cookbooks and Crafts.