Killer Character’s authors have some  red-hot releases this month! Celebrate your right to read by trying them all!

Cozy Days of Summer giveaway...see below...

Gourmet food market owner Erin Murphy is determined to get Jewel Bay, Montana’s scrumptious local fare some national attention. But her scheme for culinary celebrity goes up in flames when the town’s big break is interrupted by murder…

Food Preneurs, one of the hottest cooking shows on TV, has decided to feature Jewel Bay in an upcoming episode, and everyone in town is preparing for their close-ups, including the crew at the Glacier Mercantile, aka the Merc. Not only is Erin busy remodeling her courtyard into a relaxing dining area, she’s organizing a steak-cooking competition between three of Jewel Bay’s hottest chefs to be featured on the program.

But Erin’s plans get scorched when one of the contending cooks is found dead. With all the drama going on behind the scenes, it’s hard to figure out who didn’t have a motive to off the saucy contestant. Now, to keep the town’s rep from crashing and burning on national television, Erin will have to grill some suspects to smoke out the killer.


Olivia Greyson, proud owner of The Gingerbread House—a quaint shop that specializes in all things cookie—and her best friend, Maddie, are baking up scrumptious treats for their cookie-themed parties. But when a stunning antique cookie cutter collection leads to murder, things get a bit too hot to handle…

After a brief vacation to escape the summer heat, Olivia returns home to find the safe at her beloved store stuffed with unfamiliar cookie cutters. The cutters are part of a priceless set owned by former local Greta Oskarson, who has returned home after fifty years in the hopes that Olivia will broker their sale.

But before Olivia can sell a single piece, Greta turns up dead. Though the cause of death appears natural, something is not quite right—between Greta’s mysterious past and her long list of enemies, Olivia suspects murder. And with Sheriff Del Jenkins away, it’s up to Olivia and Maddie to sift through the cookie cutters and the clues before the killer claims another victim…

In Sugar Grove, New Hampshire, people are serious about their maple syrup—especially Dani Greene, whose family owns the Greener Pastures sugarhouse.  But when murder disrupts the small-town sweetness, Dani pores over clues to draw out a killer...

Despite being a fourth-generation syrup maker, Dani isn’t stuck in the past. She’s starting a new agricultural cooperative that reduces costs for every syrup producer who joins. Everyone considers it a sweet deal except the die-hard curmudgeon Frank Lemieux—and when a saboteur starts targeting supporters, everyone suspects Frank.

But it turns out they’re barking up the wrong tree when Dani finds Frank murdered in his own sugarhouse. As the sabotage continues, she realizes that Frank was framed. With the help of her family, and a handsome official from the Fish and Game Department, Dani must catch the killer before another syrup maker kicks the bucket. Recipes included!

Muffin maker Merry Wynter hopes to find a buyer for the castle she’s recently inherited. But when she throws a party to draw interest, she finds someone who’s bought the farm instead…

Merry’s career as a New York City stylist has crumbled, but her passion for muffins has helped her rise upstate in Autumn Vale. Everyone in town loves the tasty treats. Still, she would like to return to her glamorous life. Besides, the upkeep of Wynter Castle is expensive, and Merry’s cup isn’t exactly overflowing.

So in order to bring some prospective buyers into the mix, Merry whisks together a spooky soiree and decorates the castle with dashes of fabric and a sprinkling of spider webs. Friends new and old are invited, and everyone has a blast. But as the revelers empty out, Merry notices one partygoer who isn’t leaving—or breathing. Now Merry must hurry to unmask a killer before her perfect plans turn into a recipe for disaster. 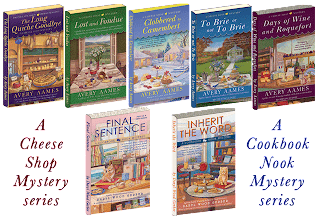 Do you love giveaways? Are you an avid summer reader?


Good luck and be sure to leave an email address in your comment so Daryl a.k.a. Avery can contact you!
Submitted by Unknown