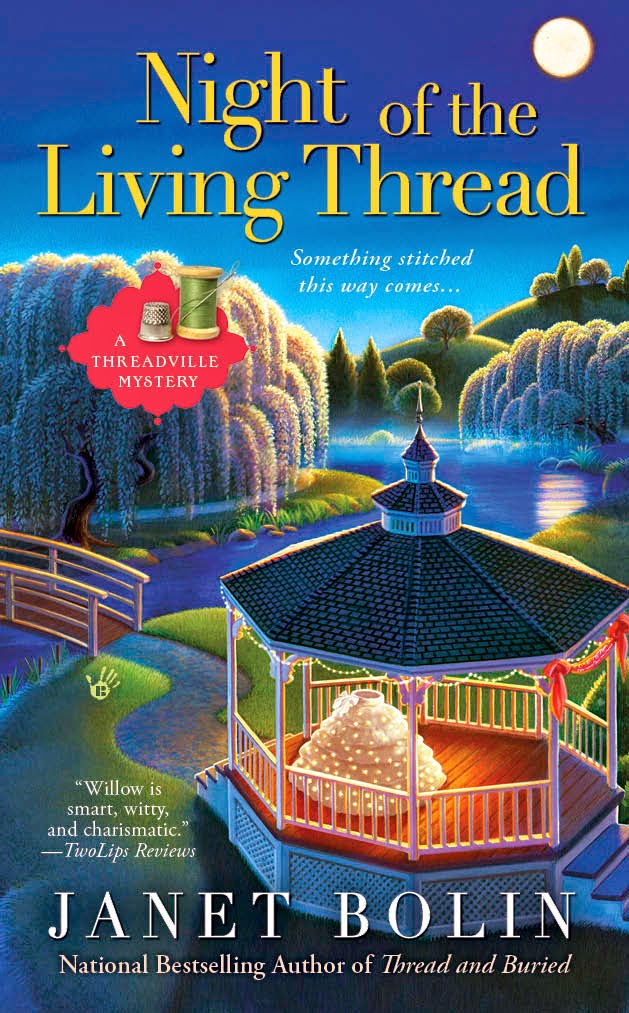 by Mrs. Battersby from the Threadville Mystery series by Janet Bolin

I know what they think, some folks anyway. They say I’m a difficult person, and that I’m hard to get along with. Those folks are probably the ones who don’t want to hear the truth, or the truth as I see it. My daughter, Edna, tells me to think before I speak. I do. I think a lot. And then I tell people exactly what I think. Unfortunately, some folks don’t want to hear it.

And I do have friends. I’ve known Marsha since grade school. We write letters to each other only once or twice a year, but we’re still friends.

Marsha called me this morning. “Dora! Something terrible has happened at Cloverleaf High. It's a crime!!"

"What?" The captain of the football team had aged during the past forty-some years, along with the rest of us? Cloverleaf High was built about the same time as the Pennsylvania Turnpike, and overlooked one of the first cloverleaf intersections in America. This was a source of pride to the powers-that-were.

I burst out laughing. Maybe I’m also supposed to think before I laugh, because my laughter seemed to scandalize poor Marsha, and I had to explain, “I hated sewing in Home Ec.”

“But that’s where we learned to sew!”

“I didn’t.  I made a mess of everything. My mother said I might as well go out selling rags on the street, I was ruining so many good pieces of material.”

There was a pause, and then Marsha said in a calmer voice, “Our sewing teacher wasn’t a very good teacher, was she.” It wasn’t a question. “Not to you and some of the other girls.”

All these years later, I still felt like stamping a foot. “No, she was not.”

“She really only taught the girls she liked.”

I agreed. “She only helped the ones who—I think they call it stroking an ego, now. I didn’t stroke her ego.”

Marsha laughed. “You certainly didn’t. I guess I did.”

I conceded, “At least she never caught you sticking your tongue out at her.”

“But all Home Ec teachers can’t have been unfair, over the years. Why did they cut sewing out of the curriculum?”

I guessed, “The days when people needed to make their own clothes are long gone?”

“But it’s a great hobby. Look at all of us who love to quilt!”

“Hobby,” I repeated. “Hobbies are something you do for fun. Maybe too many sewing teachers ruined sewing for students. I love knitting, spinning, and weaving, which I learned from my grandmother. If some horribly unfair teacher had tried to teach them to me in school, though, I probably would have rebelled against them, too, and then what hobby would I have?”

Marsha’s answer was quick. “Woodworking. Back then, they didn’t let girls take Shop. Now they do, so some things have improved. But if I were a high school kid, I’d want to learn to sew.”

“But you’re not, and you already know how.”

I decided not to argue with her about that. Maybe, in a way, I like being impossible.

What hobbies did you learn from your grandparents?


Janet Bolin is the author of the THREAD AND BURIED, THREADED FOR TROUBLE, DIRE THREADS, and NIGHT OF THE LIVING THREAD.

You can read about how |Mrs. Battersby helps Willow follow an undulating trail of glow-in-the-dark thread, unravel ancient Egyptian curses, and creep through a haunted graveyard to unearth a killer in NIGHT OF THE LIVING THREAD, available at these booksellers. Read the first chapter here.