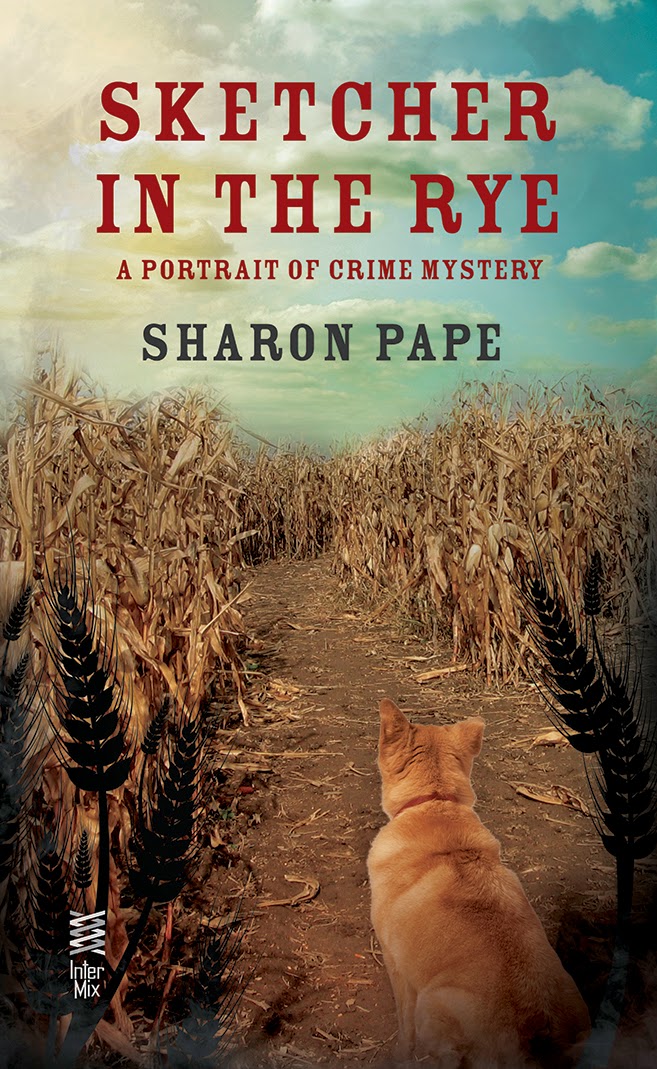 by Zeke Drummond, from Sketcher in the Rye, a Portrait of Crime Mystery by Sharon Pape

There was a time, back when I was a federal marshal for the Arizona Territory, that I had an unusual experience I’ve never shared with anyone. That is to say, I’ve never shared with anyone besides Matt Forrester. You see, Matt was still a wet-behind-the-ears new recruit at the time. He was ridin’ with me to learn the ropes, what folks today might call an internship. I wasn’t any too happy about playin’ nursemaid, but in the end I was mighty glad I had him along. Otherwise I would surely have doubted my sanity. The reason I’ve decided to talk about it now, is because I’m long dead and my reputation can’t suffer for it. More importantly, my family won’t have to bear up under the shame of havin’ a son who’s the subject of gossip, or worse, pity. That said, I’ll get on with my story.

It was in July and hotter than Purgatory in the Territory. Winds they call the Monsoons were blowing through, whipping up the dust and grit so you couldn’t see your hand in front of your face. No rain, mind you, just the infernal wind. It caught Matt and me on the trail of the Grandy brothers, a couple of no-account men who specialized in robbin’banks.  They came from a family that had more than a noddin’ acquaintance with the justice system. The wind got so bad we could barely breathe or keep our eyes open. When it gets crankin’ like that, you have no choice but to hold up. We turned the horses so their flanks would bear the brunt of it, and we sheltered against them the best we could. By the time it rolled away, Matt and I were left with the coarse desert sand in our hair, our mouths and noses, even in our clothin’, right down to our drawers and in some places through those as well. There was nowhere to go and wash it away. There’d been no rain to speak of that winter and spring, so what creeks there might have been, were bone-dry. Even if we’d been near a town, we couldn’t have wasted the time to stop and let the Grandy’s trail grow colder. It was hard enough trackin’ someone through the dry, desert scrub. Often times I had to rely on nothin’ more than intuition. I remember thinkin’ how much easier it would be if I lived in a place where it rained regular-like. Mud was mighty good at holdin’ onto prints from man and beast. But Arizona was my home, and home has a certain pull on a man, whether or not he wants to admit it. So after Matt and I shared our drinkin’ water with the horses, we set out again. Neither of us talked about the discomfort of ridin’ with sand grindin’ between our bodies and the saddle, although Matt kept shiftin’ his position, no doubt tryin’ to find himself a bit of comfort. It wasn’t long before his gyrations made his horse uneasy, and he was forced to settle down with his misery. We rode on for several hours without further interruption, but since misfortunes tend to run in packs, I wasn’t too surprised when we came upon the body of a man. He hadn’t been dead long, because the desert sun had barely started whittling away at him. We checked to see what had done him in, expectin’ to find a bullet hole or the signs of a hangin,’ but what we found was a whole lot more troublin.’

I’m afraid I’ve run out of time for today, folks, but I hope you’ll stop back here on the third of October to hear the rest of my strange tale. You take care now.

Email ThisBlogThis!Share to TwitterShare to FacebookShare to Pinterest
Labels: A Portrait of Crime Mystery, Sharon Pape, Sketcher in the Rye, Zeke Drummond