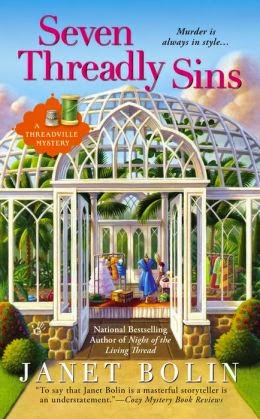 by Willow Vanderling from SEVEN THREADLY SINS by Janet Bolin

No, I don't intend to dye my hair green or wear a wig today, but my dogs, Tally-Ho and Sally-Forth, who have sniffed out a few clues that helped bring murderers to justice, have already tried on their wigs. Do you think anyone will recognize them?

Here in Elderberry Bay, also known as Threadville because of the stores catering to people who work (play) with thread, yarn, and fabric, we love dressing up. Costumes, wigs, masks, you name it.

So as you can imagine, if there's a reason to celebrate, put on disguises, or wear any sort of costume, we participate enthusiastically. A lot of the fun is making our own outfits.

I own the machine embroidery boutique, In Stitches. I teach folks how to create and stitch their own embroidery designs. We use sophisticated software and amazing machines. I also love to sew, and make most of my own clothes.

My best friend, Haylee, owns The Stash, the huge fabric store across the street. She is an accomplished tailor, so you can imagine the beautiful clothes and intricate costumes she makes for herself.

Next door to Haylee is her mother Opal and Opal's Yarn Shop, Tell a Yarn. Using chunky yarns and big, fat knitting needles or crochet hooks, Opal can whip up outfits for herself in record time. She can also crochet or knit the thinnest threads imaginable into gossamer shawls.

The shop next to Tell a Yarn is Buttons and Bows, owned by Edna, who recently married Threadville's beloved doctor. Edna puts so many embellishments on her clothes that it's impossible to tell if she made the basic garment or not, but I know the answer to that. She did.

Next door to Edna's store is Batty About Quilts, which sells quilting supplies and machines.

In her home décor shop, Country Chic, Mona sells upholstery and drapery fabrics, along with an eclectic collection of furnishings.

All of these women have helped, and sometimes hindered, murder investigations.

Most of the time, there are no murders, and with so many crafty people and fun and talented customers, Threadville is a wonderful place to live. And I hear it's about to become even more exciting. A new post-secondary school is about to open--the Threadville Academy of Design and Modeling. Think of the opportunities! Taking night school courses, meeting real clothing designers, maybe even participating in a fashion show or two!

What are some of the things you would like to learn at a school of design and modeling? Answer below and you will be eligible to win a copy of a Threadville Mystery--your choice, including SEVEN THREADLY SINS when it becomes available.

Find out whether the new school lives up to Willow's expectations in the fifth Threadville Mystery, SEVEN THREADLY SINS, in stores May 5. Click here for information on pre-ordering it. In addition, Janet's publisher has made 10 copies of SEVEN THREADLY SINS available in a Goodreads Giveaway, for U.S. addresses only.

Janet Bolin reads, writes, sews, embellishes with machine embroidery, and walks a couple of dogs (who are strangely like Sally-Forth and Tally-Ho without wigs) on the shore of Lake Erie.