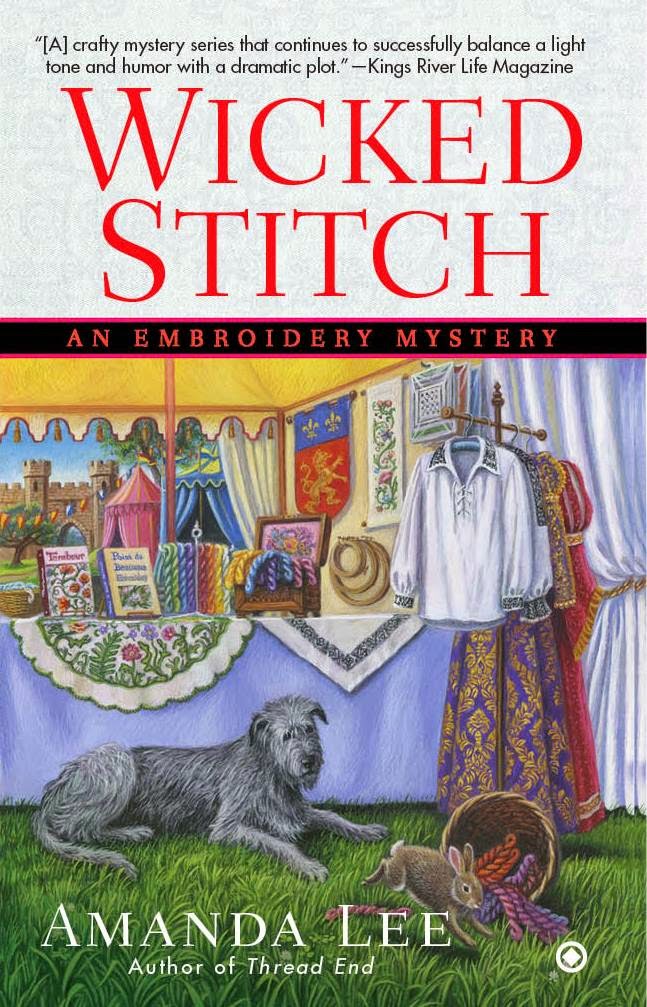 One bad apple...that's all it takes to spoil the whole bunch. And, around here, that bad apple is Nellie Davis. Unfortunately, she's brought a worm right into our midst with her. It's her sister Clara.

Here all of us were gearing up for the Renaissance Faire coming to Tallulah Falls when Nellie's sister Clara not only moves into the space next door to Marcy's shop, she opens a competing embroidery shop. It made me so mad I could spit.

Now, I'm not someone who's afraid of competition, and I know good and well that Marcy isn't either. It's the malice behind that competition that bothers me. Marcy and Nellie have never gotten along, mainly because Nellie wanted her sister to have the shop where the Seven-Year Stitch is currently located. But I'm really the one to blame for that. As soon as I saw the For Lease sign go into the window, I called Marcy and talked her into embarking upon her dream of opening an embroidery specialty shop. The rest, as they say, is history. Or, as far as Nellie Davis is concerned, it was the start of the Davis-Singer feud.

Nellie and Clara both act as if Marcy is some sort of monster, and it makes my blood boil. And Angus.... You couldn't ask for a sweeter dog! But Clara thinks Angus is a vicious killer and that he's going to eat her bunny.

Let me explain. Clover, the bunny, got out of Clara's store one day. Marcy spotted the rabbit on the sidewalk outside the Seven-Year Stitch and brought it inside so it wouldn't dart out into the street and get hit by a car. After seeing that Angus and the bunny were all right together, Marcy put the rabbit down and allowed the two of them to play. Then Clara came to "rescue" the bunny from the clutches of Marcy and her evil dog. The funny thing was the rabbit tried to hide between Angus's paws rather than go back to Clara!

I know that into every RenFaire a little rain must fall, but I just hope it doesn't end up being a downpour. How do you deal with the toxic people in your world?

Please leave a comment below to be entered to win either a paperback or digital copy of WICKED STITCH. U.S. readers will have a choice between the two; international readers will receive the book in the digital format of their choice. Good luck!