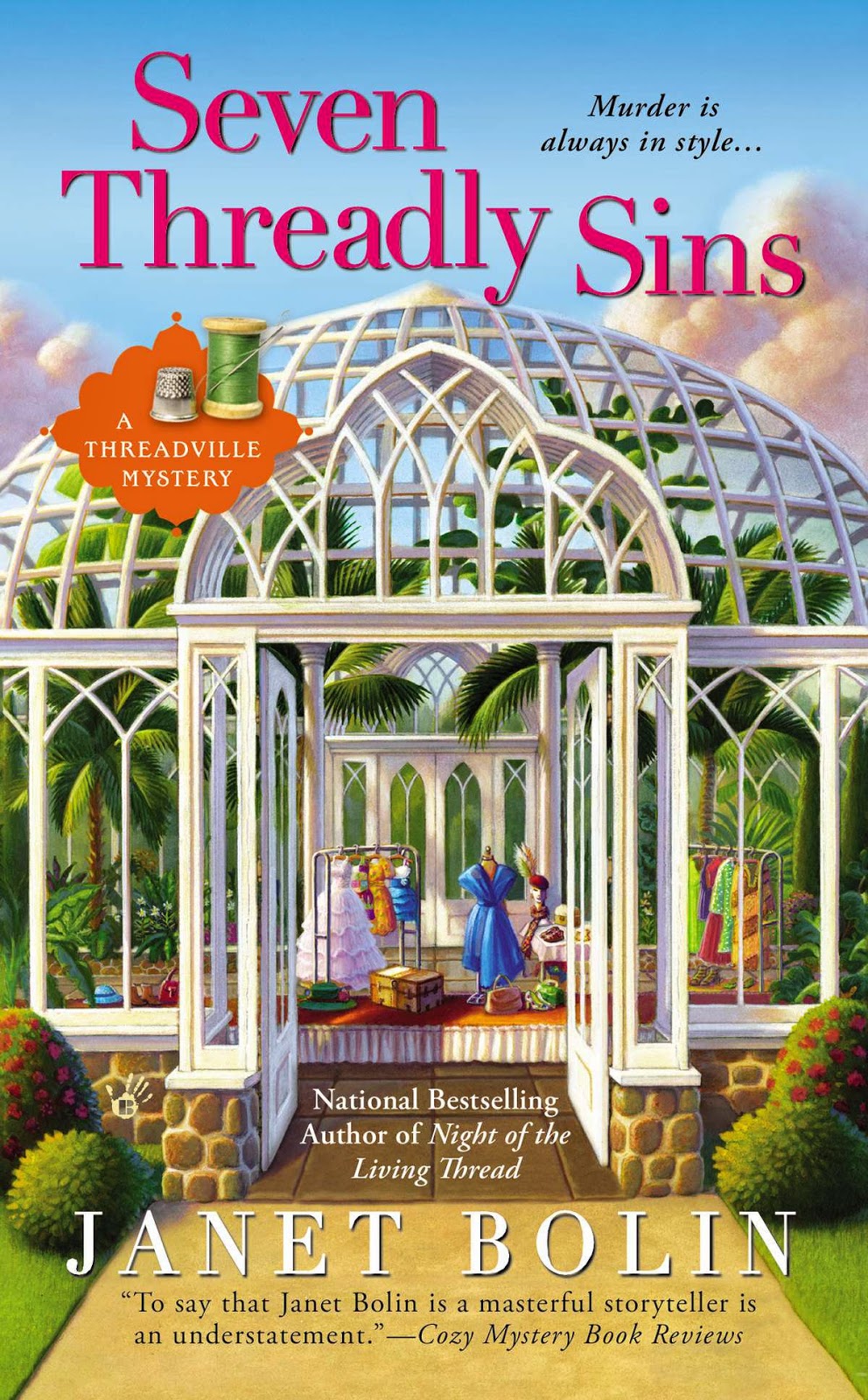 by Dora Battersby from SEVEN THREADLY SINS by Janet Bolin

Many of you already know me, or you know my daughter, Edna, who owns the notions shop, Buttons and Bows, in Threadville, Pennsylvania.

I have a confession to make. I've been grumpy for most of my life. I wasn't unhappy, and I didn't mean to make others unhappy, but you know how it is (or maybe you don't): I was sort of invested in being forthright, and unfortunately, forthright people can sometimes speak before they think. Yes, I did that. No, not all the time,what were you thinking!

I raised Edna by myself, and I was petrified that she might become a single mother also. She didn't, but one of her best friends, Opal, became pregnant at sixteen. Edna and their other best friend, Naomi, joined forces and the three of them raised the baby, Haylee, together.

Not living near them, and not really approving, I mostly stayed away (I know, I know, you don't have to tell me that my behavior was terrible.) The women all finished degrees and had good careers, and then Haylee grew up and opened a fabric store in Threadville. Edna and her friends quit their jobs and moved to Threadville, too, to open their own shops--a yarn shop for Opal and a quilting shop for Naomi! I could hardly believe such audacity.

Maybe I nagged Edna too much about establishing herself in her career before she had children. She put her career way, way ahead of finding a man and having a family. She finally got married last year, but she's just about beyond child-bearing age. By the time of the wedding, I had finally retired, and could take the time to go to Threadville so I could attend the wedding. Edna put me up with Haylee. I was a little hurt that Edna didn't want me with her, and maybe I was a little crochety about the entire thing.

But then this woman, a stranger in town, and not a wedding guest, went and got herself murdered. Haylee has a best friend, Willow, who owns the machine embroidery shop, In Stitches. Willow had helped the police solve some murders before, and I couldn't help sticking my nose into this investigation

I felt sorry for the poor woman who died, of course, but I have to admit that I rather relished gathering clues and drawing conclusions. Best of all was being scared half to death in that haunted graveyard. 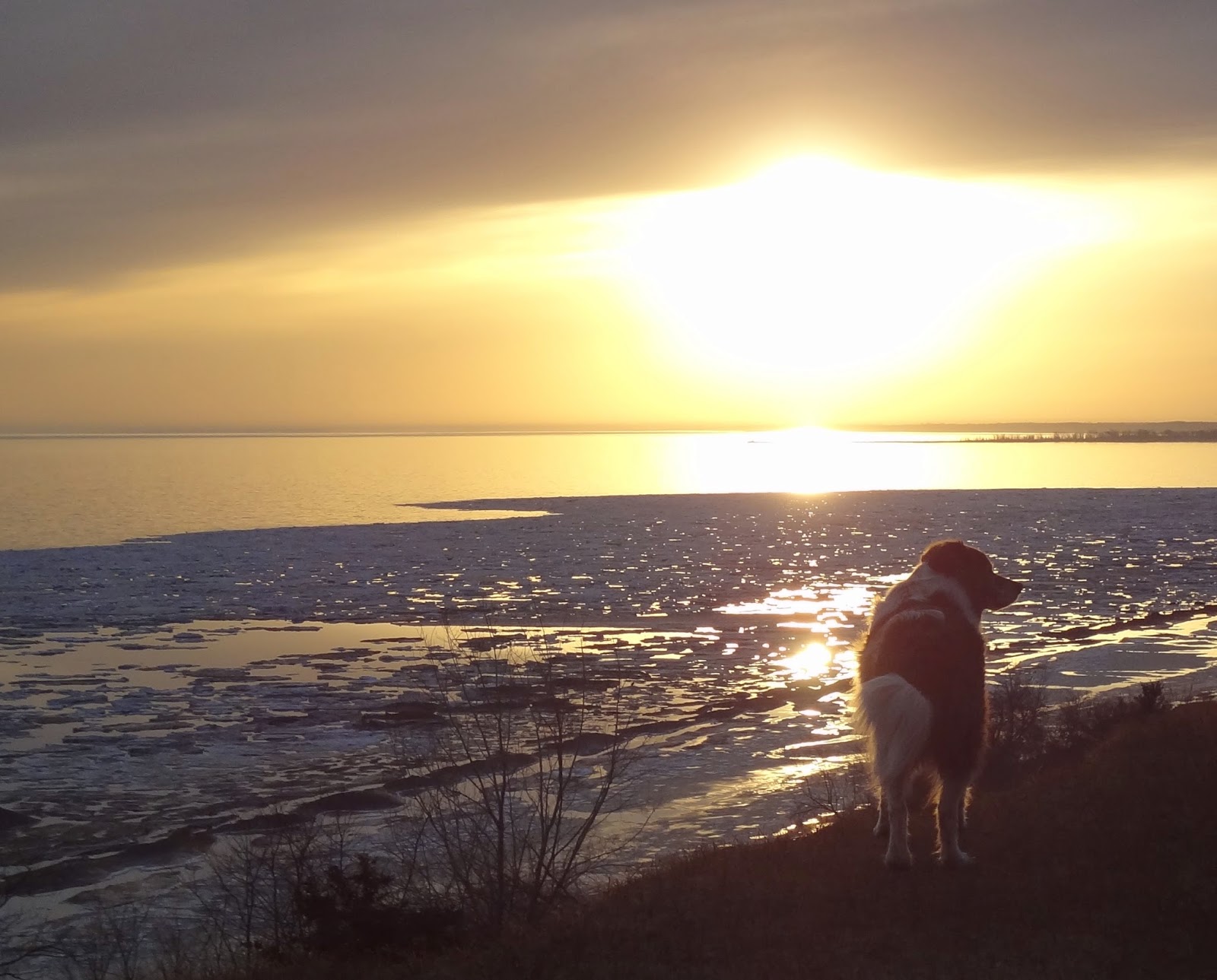 Willow has a little rental cottage in her back yard. I helped design the renovations, and now I'm Willow's tenant. I'll be ready to give her a hand with whatever she needs.

Meanwhile, Threadville has grown on me, and I enjoy the company of the two young women (and the two young men who interest them...) and I also enjoy the company of Opal, Naomi, Edna, and my new son-in-law, Gord. I'll still say what I think--I call it honesty--but maybe I'm not such a grouch any more. I hope not. You could say I'm thawing, kind of like the ice out on Lake Erie right now.

What about you, if you had a chance to help with a murder investigation--and stay completely safe while you did it--would you want to try?

You can purchase Threadville Mysteries from any bookseller. Ask them to order a copy if they don't already have it in stock. In addition, most libraries are open to suggestions about purchasing, and can also borrow books from other libraries. For links to buy Threadville Mysteries, click here.