My Story Has Begun

by Carrie Kennersly, veterinary technician and owner of a brand new barkery and bakery, whose adventures are memorialized in the Barkery & Biscuits Mysteries by Linda O. Johnston

Hi.  I was here a few months ago to let you know that I was about to appear in a new mystery series.  Well, now they have begun, so I'm back.


Not that I ever wanted to be a protagonist in a mystery series.  For one thing, I'm too busy.  I now have two careers I'm juggling at the same time. 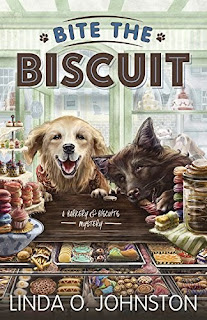 First, I own and run two bakeries in .  One is an offshoot of the single store that used to be at that location, Icing on the Cake.  There, I bake and sell wonderful baked goods for people.  They were mostly developed by my friend Brenda Anesco, who owned Icing but sold it to me when her mother became ill and she needed to move away to take care of her.


Brenda also allowed me to turn half of Icing into Barkery and Biscuits, where I now bake and sell some of the treats I developed as a veterinary technician--healthful things that I love to create.


You see, that is my other career.  I'm still a vet tech, and now I work part-time at the Knobcone Heights Veterinary Clinic.


And... well, the story Bite the Biscuit is about how I became a murder suspect.  I suppose that trying to clear myself by figuring out who really did kill Myra Ethman, wife of a member of one of the town's premier families, could have been considered a career in itself, at least for a while.


At least I have friends and family who support me emotionally, from my adorable dog Biscuit, a gold toy poodle-terrier mix, who was here talking to you on Killer Characters last month, to my brother Neal, who lives with us, to my veterinary boss Dr. Arvis Kline--Arvie to his friends like me, to the Joes--Joe and Irma Nash, who own Cuppa-Joes, my favorite coffee shop.  Then there's Dr. Reed Storme, another vet at the clinic, who seems interested in me, as well as some other guys...


I think you get the picture.  I've got lots going on.  And I understand there's more to come.


I can't tell it all here, though, so you might want to grab a copy of Bite the Biscuit to learn more about me and that situation.  While you're at it, why not grab a sweet for yourself and give your dog or cat a treat, too.


BITE THE BISCUIT, the first Barkery & Biscuits Mystery by Linda O. Johnston, is a May 2015 release from Midnight Ink.