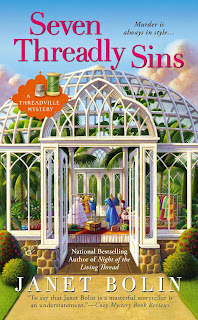 by Dora Battersby from SEVEN THREADLY SINS by Janet Bolin

They say that happiness is contagious. That always sounded like a load of balderdash, a way to get people to buy greeting cards with sickening sayings on them, or to send flowers that drop their petals all over your white tablecloth, or to throw insincere and fake-looking smiles at people. How would any of that spread cheer around the world?

Anyway, what was there to smile about? I raised my daughter Edna by myself, and she was a good kid, and so were those two girls she met in kindergarten, Opal and Naomi. They were inseparable and whenever they were with me, their sunny voices and laughter lifted my spirits.

And then, when they were sixteen, didn’t Opal go and get pregnant, and didn’t her two loyal friends decide to help her raise her child?

Opal’s folks disowned her, and I have to admit that I wasn’t much more compassionate. I thought for sure the three girls were throwing away their chances at careers and happiness, and I let them go their own way, then I was too stubborn to admit I’d been wrong. They all ended up with great careers and they all doted on Haylee. Then they all threw over their careers and moved to a small village on the shore of Lake Erie, not far from Erie, Pennsylvania, and opened stores!

Now, I spin and weave, and I love yarn and textiles, so I thought the idea of a main street lined with sewing, yarn, notions, and quilting shops sounded like a fun place to visit. So why didn’t I?

Then Edna sent me a wedding invitation. Her own mother, and that was how she told me she was getting married . Oh well, it wasn’t like I was ever going to get excited about all the hullabaloo involved in planning a wedding. So I went to Threadville and stayed with Haylee, who had grown into a warm and caring young woman. She treated me like a beloved grandmother.

Haylee’s best friend Willow has a machine embroidery shop across the street from Haylee’s huge fabric shop. The two young women had helped solve murders before, and shortly after I landed in Threadville, someone was murdered.

Well! I wasn't going to let them solve a murder without my help.

Meanwhile, Willow, with this tall, handsome young contractor, was renovating a cottage in the back yard of her shop and apartment.

I helped design the cottage just the way I liked.

Now I’m Willow’s tenant. I spin and weave in my precious Blueberry Cottage. I spend time in Willow’s yard with her dogs and cats, and they all visit me. Haylee looks after me as if I really were her grandmother, and the laughter of Edna, Opal, and Naomi still brings sunshine to a dull day.

Threadville’s customers love the village. They arrive in tour buses nearly every day to take courses and to browse and buy.

I think I’ll stay. I have never been happier. Maybe happiness is contagious, in Threadville at least. But please don’t tell Edna I admitted it. The worst thing you can say to a certified life-long grump  is “I told you so.”

Willow’s outside with those two darling dogs, and I just happen to have a couple of small bits of chicken I didn’t finish last night. Talk to you later. Bye!

Do you think happiness is contagious?

Read about how Dora Battersby helped solve a murder in the recently released fifth Threadville Mystery, available at these booksellers.