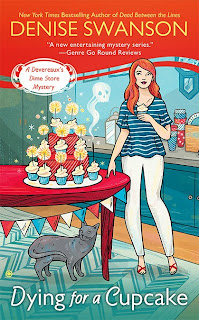 Dev Sinclair from Denise Swanson's Devereaux Dime Store Mysteries dishes the dirt on her love life.
Man or man do I have man trouble. Who would have ever thought that a curvy woman fast approaching thirty would have three hunky guys in hot pursuit? Certainly not me.
Heck! For the past several years, when I worked as a big deal financial consultant in Kansas City, I barely dated. Then I bought the dime store in my hometown of Shadow Bend, Missouri and the men started coming out of the woodwork.
First, Jake came into my life. He's a U.S. Marshal who helped get me out of a pickle when I was accused of murder.
Second, Noah knocked on my door. He's my old high school boyfriend who wants a second chance with me.
And just now, Coop turns up. He's the hot new fire chief in town who is helping me with Shadow Bend's recent spate of attempted murders. When I agreed to host a cupcake contest, I never dreamed that someone would start trying to kill the sponsor. Of course, I never thought, that I'd be having trouble choosing from three guys either.