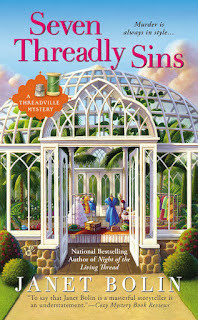 by Willow Vanderling from SEVEN THREADLY SINS by Janet Bolin

I love sewing. I love embroidery, especially the way I do it, with machines and software.

I also love clothes, and I love adding my creations to my wardrobe.

So, when Antonio, director of the Threadville Academy of Design and Modeling, asked me to make four outfits for a charity fashion show, I liked the idea.

I was a little less enthralled, however, when I found out I wasn't going to design the outfits myself. But then Antonio said he would design the garments and I could work from sketches. It sounded like a fun kind of learning experience, and a challenge.

It was a challenge, all right! The outfits as he sketched them didn't suit me at all. I like many different types of clothes, but one outfit was clownishly gaudy, one was dull, drab, and dowdy, one was so bare it would have to be glued to my skin, and the fourth one was just plain ludicrous for anyone over the age of two.

I modified the outfits a little, made them carefully, and added the machine embroidery for which my shop, In Stitches, is famous, er notorious, and I felt pretty good about the whole thing.

Then, during the dress rehearsal, I became concerned about the way Antonio treated some of his students. The actual show went well, though, until my six friends and I went onstage for the "Awards Ceremony."

Antonio thought he was being very funny.

The rest of us did not agree.

Have you ever been in a show of any sort where things did not go as well as you expected? Tell us what happened. One lucky commenter will win a copy of SEVEN THREADLY SINS.

Janet Bolin writes the Threadville Mystery Series and also enjoys dressing up in costumes and going onstage, where she undoubtedly commits various sorts of threadly and theatrical sins... 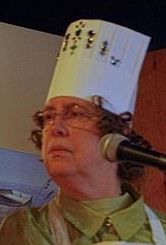