I'm turning five! Well, sort of. On June 16, 2010, five years ago, the first mystery starring me and author Amanda Flower's first published novel released. The book went on to be nominated for an Agatha Award for Best First Novel, attracted the attention of the world’s best literary agent, and led to the release of twelve more novels by Amanda Flower AKA Isabella Alan over the next five years. 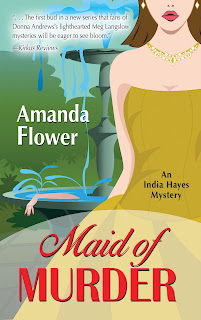 To celebrate the fifth anniversary of this great day, Amanda has decided to donate all of the royalties that she earns June 1, 2015-September 1, 2015 from the two novels in the India Hayes Mystery Series, Maid of Murder and Murder in a Basket,  to charity. There is no better way to celebrate her 5th anniversary as a published author and my 5th birthday as a character.

After the great success of The A Plain Malice Giveback last fall, Amanda has chosen another local charity close to her heart, The Charitable Pharmacy of Central Ohio.

The Charitable Pharmacy of Central Ohio provides free medications to low-income, uninsured, and under-insured residents of Franklin County, OH. Since opening on February 26, 2010, the Charitable Pharmacy has served 4,250 patients and dispensed over 200,000 prescriptions valued at more than $17 million. All the money raised will go to this worthy cause.

Please watch this video to learn more about the pharmacy or visit their website for more information.

The cost of all ebook editions of both novels is $1.99! 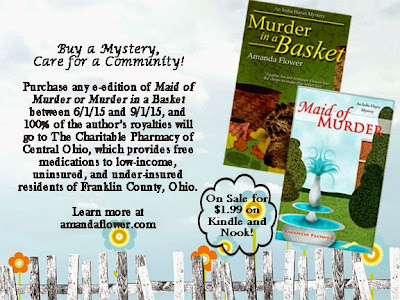