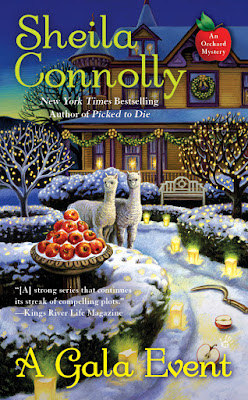 My daughter Margaret—Meg—is getting married in December. I was beginning to wonder if I’d ever say that. Not that I insist that every woman must be married, but I suppose most mothers hope so.

Meg has worked hard and been reasonably successful, at least until she got blindsided by losing her job and the man she had been seeing at the same time. At that time I thought I was doing her a favor by sending her to Granford to fix up an 18th-century colonial house I had inherited a while back and getting it ready to sell. I was quite wrong, at least at first, because a lot didn’t work out as I had hoped or expected. I wouldn’t have blamed Meg if she’d just thrown up her hands and walked away from it then.

I don’t see her much these days, because we live several states apart, but the first time I visited her in Granford I could tell she was changing, and it was all for the better. She’d taken on some interesting new challenges. She’d made friends. She was settling into her new community. (And, not incidentally, she helped clear me from suspicion of murder—another thing I never expected to see.)

Her fiancé Seth Chapin lives next door, or rather, his house is next door, over the hill where you can’t even see it, but he spends most of his time at Meg’s house. He is, to put it plainly, a good man. He’s smart, he (like Meg) works hard, he’s both liked and respected in Granford, he’s kind to his mother and sister—now I sound like I’m gushing, which is not my style. But it’s all true.

I’ve been married to my husband Phillip for quite some time, and I would say we’ve had a good marriage. I’m not sure how Meg saw it when she was growing up, because it took her quite a while to decide to follow our path. But if she was waiting for the right person to come along, I think she was right to wait. I’m so glad that she and Seth found each other.

The wedding might have turned out a bit differently if Meg hadn’t encountered a Granford man who’d just been released from prison—and who would like to think he was wrongly convicted. Of course Meg had to jump in to help, only weeks before the wedding. But I don’t mind that she’s holding the event in a small restaurant and inviting only her local friends—no minister, no white dress, no traditional frills at all (although she tells me that she has insisted on an extravagant wedding cake). That’s the way both she and Seth want it, and all I want is for my daughter to be happy. I think she has a good chance.

A Gala Event (Orchard Mystery #9) will be released on October 6th. It's available for preorder now from Amazon and Barnes and Noble.