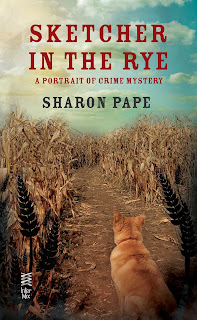 by Marshal Zeke Drummond, from the Portrait of Crime Mysteries by Sharon Pape

“Howdy, folks. I want to tell you about a little trip Rory and I took upstate. It’s been my observation that residents of  Long Island call any place north of New York City, ‘upstate,’ which covers a considerable amount of territory. Rory was headin’ to see an old college buddy in Schuyler County. She left her dog, Hobo, with her parents and didn’t exactly invite me along either. But the truth is, I get lonely when she’s away. We ghosts are generally a  solitary lot, but Rory and I have forged quite a bond, and I find myself at odds when I’m alone for too long. She didn’t discover I was ridin’ shotgun until I materialized beside her, causin’ her to swerve into the next lane and me to receive a dressin’ down that lasted a good two miles. Lookin’ back, I probably should have revealed myself when we were still parked in the driveway.

Her friend had suggested she stop along the way at a touristy, little town with the peculiar name of New Camel. At the time, I wasn’t sure what made a town ‘touristy,’ but now I understand it to mean quaint shops that sell homemade fudge and ice cream, or sundries like postcards, tee shirts, baseball caps and items for which the area is known. For the life of me,  I couldn’t figure out how that made any sense, since so many of the touristy goods actually came from China and Mexico.

Of all the shops Rory and I visited that day, we were the most intrigued by one that appeared to be a lot older than the rest. The sign above the entrance said ‘Abracadabra’ and in smaller letters, ‘Magick Shoppe.’ Kaylin Wilde, the young proprietor, told us she sold natural remedies, ancient spells and grooming products prepared from old family recipes. Now, I never have believed in magic, thought it to be pure tomfoolery. Of course I never believed in ghosts either, until I became one. Yet I have to admit that when I was in that shop, I sensed I was in a place unlike any I’d entered before. Rory said she didn’t feel anythin’ out of the ordinary. I suppose that may be because we inhabit different planes. What I know for sure is that I haven’t been able to get that shop out of my mind. I know Rory’s feelin’ the same way, but in her case it’s mostly because she thinks the body lotion and shampoo she bought there work like magic. One way or another, I’m mighty sure we’ll be seein’ more of Kaylin Wilde and her Magick Shoppe in the future.