A Sleepless Tale of Two Kitties 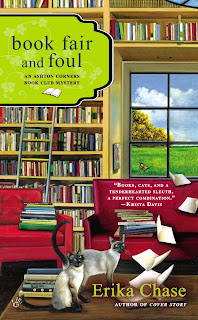 After a couple of nights of interrupted sleep, I’ve come to the unscientific conclusion that restless cats do make for a rest-less night of tossing and turning. First one cat gets up and does that Siamese yowl while walking downstairs. Once she’s back and settled, I’m talking Brie here, it’s Edam’s turn to leap out of bed and race down the stairs.  Fingers crossed he hasn’t heard a mouse!

After that, it’s like the door outside game. I want in, you want out, I want in, etc. If you are living with cats, then you know both these scenarios because you’re the one who suffers.

Of course, there’s the bedtime possibility that Brie wants to sleep curled up in the crook of your arm and Edam leaps onto the bed and heads straight for the chest, close enough to lick your chin every now and then. When he tires of that, he snuggles on the legs. That’s one pinned down human struggling to get to sleep.

I know, a saner and smarter person would close the bedroom door, making sure they’re on the opposite side of it. But I have to admit, I look at the bedtime rituals as part of the benefits of having cats. Sleep is highly over-rated, after all. 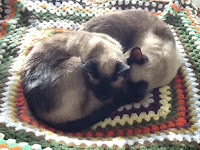 Of course, the dear furry felines catch up on their missed hours of sleep during the day. When was the last time I had the luxury of a nap? Huh! Doesn’t happen.

Sigh…what’s a cat lover to do?


BOOK FAIR AND FOUL, the 4th in the Ashton Corners Book Club Mysteries
is now available!

Also available are COVER STORY, READ AND BURIED and, A KILLER READ,  (#2 on the Barnes and Noble Mystery Bestseller List and an Agatha Award nominee for Best First Mystery)
Look for book #5, LAW AND AUTHOR Sept. 1, 2015