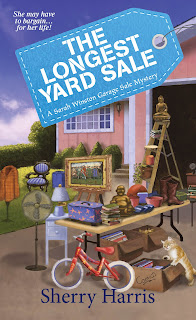 All I have to say is choose carefully when you’re renting out an apartment in your converted house. I’m Stella Wild and about a year ago I rented out one of the four units in my  house to a woman named Sarah Winston.  Our relationship didn’t start out the best although I took pity on Sarah when she was having problems with the police. Troubles with the police I understand -- all too well. Come to find out Sarah’s a lot of fun although a little bit of a nut when it comes to going to garage sales. She loves them. Last spring I was telling her how my aunt, the town manager of Ellington, Massachusetts, wanted to bring more tourists to town to compete with its more popular neighbors Concord and Lexington. Sarah suggested throwing New England’s Largest Yard Sale.

My aunt jumped on the idea -- she has political ambitions way beyond being town manager. Sarah’s ex, CJ Hooker, the chief of police in Ellington, took a different view. He saw problems: traffic, crowd control, and crimes. But my aunt wasn’t born yesterday and managed to overcome each objection and hired Sarah to run the event.

What could go wrong? Right? I should have taken bets, I could have made a killing. Not an actual killing but a lot of money. During New England’s Largest Yard Sale traffic was a nightmare and I heard there were some fights. But the worst thing that happened is four fires were set -- one by the high school’s new astroturf field. From what I heard that cleared the police station and fast. My aunt tried to blame Sarah but Sarah stood her ground.

All in all, even with the problems, the event was a huge success -- lots of tourists, packed restaurants, and tax dollars in the town coffer. My aunt was so happy she’s already talked to Sarah about doing a bigger, better event next year. Of course that was before anyone one knew that a copy of Ellington’s beloved Revolutionary War painting, painted by Sarah’s friend, had been stolen or that the fires were used to cover another much more serious crime. I hope I can sit back and see how this all plays out but Sarah might not be able to bargain her way out of this one so I may get dragged into it too.

Sherry Harris started bargain hunting in second grade at her best friend's yard sale. She honed her bargaining skills as she moved around the country while her husband served in the Air Force. Sherry uses her love of garage sales, her life as a military spouse and her time living in Massachusetts as inspiration for the Sarah Winston Garage Sale series. Tagged for Death, the first in the series, was nominated for an Agatha Award for Best First Novel. The Longest Yard Sale is available now.