Yes, I’m back again.  You haven’t heard from me for a long time, maybe what?  A year and a half at least.  And believe it or not, I’m still the Mayor of Snowflake, Vermont.  They convinced me to run again.  In a million years, I never dreamed I’d have anything to do with politics, much less run for office and get elected and re-elected.  I’m still shaking my head over the whole thing.  I’m not really sure how it all happened. 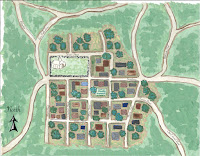 I was a teacher my whole life.  It was the thing I loved most and I enjoyed many years with a few generations of students.  Some of them have moved away, but a lot of them are still in Vermont and I do run into them occasionally.  Brings back good memories.
But the years went by so fast, time was passing and eventually I realized it was time for me to retire and make room for new people.

Retirement was a big shock!  I’ve always been a very busy person and suddenly I had so much time on my hands and didn’t know what to do with it.

Running for office was something that never occurred to me, until I was approached by a lot of people, even most of the town council, who urged me to run.  I never thought I’d win the election, but maybe no one else wanted the job.  They probably knew what a headache it could be at times -- dealing with complaints and hassles, everybody else’s good opinions, and handling the city council.  Especially when that awful developer wanted to build a car wash in the center of our village.  That was an exciting time.

I first appeared in the Soup Lover's Mysteries series in A Spoonful of Murder and I've been in every story since then.  It wasn't until A Broth of Betrayal when I foolishly stepped into it and ended up being kidnapped because of someone I trusted.  Thankfully, Lucky Jamieson rescued me.  If it hadn’t been for her, I hate to think what could have happened to me.  I would have died in that fire.

I was thrilled when Lucky Jamieson came back to town a couple of years ago.  It was wonderful to have her back again.  Her parents were my dearest friends in the world and when they died in that car accident, it was the worst blow in my life.  But I can truly say I’m glad I’m still here and I was in a position to help Lucky out, to do all those things her real mother would have done if she could have.
It’s all worked out wonderfully.  Lucky came home, she reconnected with Elias Scott, our town doctor and well, who knows, but I have great hopes for both of them.
What do you think?  Do you think I’ll be attending a wedding soon?

You can visit Connie any time at her website or on Facebook.com/ConnieArcherMysteries and Twitter @SnowflakeVT.  You can email her at conniearchermysteries@gmail.com.  She loves to hear from readers and really will answer!

Email ThisBlogThis!Share to TwitterShare to FacebookShare to Pinterest
Labels: #A Broth of Betrayal, #A Roux of Revenge, #A Spoonful of Murder, #cozy mystery, #Ladle to the Grave, #mystery, #soup, #soup recipes, #Vermont